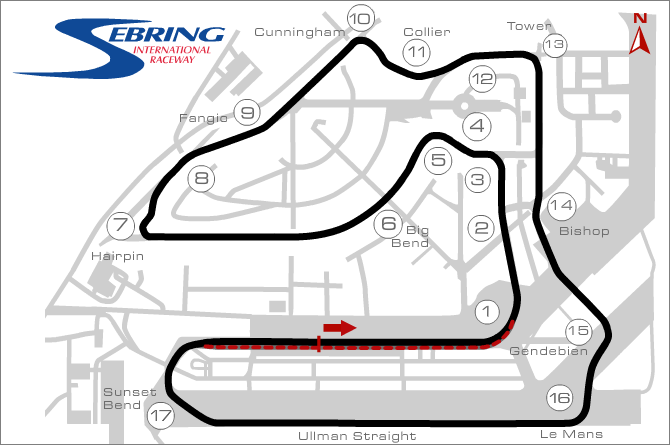 Hello, I would like to ask for a clarification on the rules of the rolling starts. First, a video:

In this video, we are watching the rolling start in chase cam of the #379 car. As we can see, as we get going, he passes the car in front of him on the left. In the YouTube chat, his teammate and the driver in question stated that this was perfectly legal.

So I went to do some digging to find out if this is in fact the case.

First, I went to the Rules Document that is noted in the Sign Up forum. In it, regarding the starts, it says this: So I then went to the iRacing Sporting Code, Article 6.8.2. And regarding rolling starts, the relevant bits are below: So then to be completely thorough, I went to the other link labeled 'PRL Rules' in the sign up forum. Which leads you to a page labeled 'Racing Rules'. In it, under a section titled 'Race Start', it outlines the rules for rolling starts. And in that section, it states the following: Unless I am missing something, nothing I see here appears to state this was legal. The only thing I can think of is that the green lights were out, just as he begins his maneuver around the inside. But even in that case, each and every relevant rule uses the term "start/finish line", nothing about the green flag waving.
The reason for this post is a clarification of the start procedure rules, not to single out Chris. Because, as you can tell, he got what would be objectively considered a really good start position-wise. So I would like it to be clear if this is something I or others can do in the future.
0 x
Top

Clarity on this would be super. I saw the cars ahead go so I went also. If the car in front of me doesn't go then am I expected to hold up and wait for him to get going? Seems wrong but would love to understand the expectation.
0 x
Top

Hi Mitch, and thanks for your comment. I think you pointed out something interesting that may requires a rules review by our team.

The rules outlined in iRacing sporting code and our website is more regarding obvious move. I want to point your attention on the following:

You can overtake a car before the start/finish line if it lacks of speed (from damage), spins or crashes.

This is probably the rules we will update on our side. In the video you shared, we can clearly see the car in front got a bad start and #379 took opportunity of that. The leader is responsible to set the pace and don't really have to start on "iRacing service Green". When the leader is increasing the pace, there is a delay before the service call it green, so at this point, it's all drivers' responsability to get a decent start, and also to all drivers' risk to attempt an overtake before start/finish line. We go with automatic iRacing race control on that.

As for passing on the inside, I think it's more an "oval" rule for the inside line. This is also something we will review internally. However, #379 did try to pass on left where the place was very limited, so he was close to causing a collision (looked like netcode) and would have likely been found at-fault.

So this is a risky move, but necessary given that the car ahead was slow in getting going. It wasn't like the car passing was hanging back and attempting to slingshot the start. He went when the other went. Perfectly legal in our opinion.

We will start discussion internally about rules update and you'll all be informed when they will be updated.

Thanks guys! That seems fair and I figured this would be good
2 x
Top

I'm sorry, but you've left me even more confused regarding what is legal and allowed. I don't know what you mean here. So the PRL rules don't matter regarding these starts? I can understand if it was a failure of the iRacing automatic control, but your rules explicitly state this is illegal. So if it doesn't bother the stewards, fine, then this section definitely needs a rewrite. The iRacing sporting code states specifically that Oval starting rules apply for rolling starts on Road courses: As far as the rules go, there is no distinction. I can understand why you don't want to penalize, as I'm not seeking one either, but there is virtually no justification, in writing, not to. If the car he passed had protested, would it have been upheld?

Honestly just going to make an iRacing forum post about this. If all deference is given to the automatic control, then we must know what the rules are that govern that automatic control, and rewrite PRL rules to fit in that framework. Because this is not clear.

If anyone knows if this topic has been brought up before in the forums, please let me know, maybe I won't have to create another thread.
0 x
Top

This has never been penalized either here or in the official series. I don't see why theres so much confusion about it. Jerome was clear: The rule is there but doesn't cover the situation that you point out on the video so it has to be updated.

iRacing does penalize you if you pass before green regardless of which side you do it, but the automatic system does not give you a penalty if you pass before the start/finish line under green flag, therefore as Jerome explained, its a valid move.

I'll look around in the forums to see what I find but really I don't find it to be a confusing topic.
2 x
Top

The reason it is confusing is because there is no mention of whether the green flag being out matters at all. There is only reference to the start/finish line.

But now I know, green means go, regardless of where you are on track. Very good to know.
0 x
Top

code_greene wrote: The reason it is confusing is because there is no mention of whether the green flag being out matters at all. There is only reference to the start/finish line.

But now I know, green means go, regardless of where you are on track. Very good to know.

I feel like its just an area not covered properly by the regs. I haven't found anything in the forums yet but i'll keep searching
0 x
Top

We can write the rules to be as explicit as possible, and there will always be unique situations that bring up discussions like this.

This is *exactly* why we have a diverse stewarding group that looks at and discusses these types of events in detail to come up with a decision that is in the *spirit* of the rules.

That said, I don't know many drivers that would not go when iracing green lights appear. Lifting when there is an available passing lane seems counterintuitive.

That said, we've made note of this, and will update the rules in the offseason as we normally do.
1 x
PRL iRacing Manager & Chief Road Steward

Once again combative in response to a legitimate question. As usual.
0 x
Top

Hey guys, I have a couple questions from round 1.

The incident with Eissler was very similar to the one with Greene. Eissler got lucky he didn’t spin Modoff with the contact, but Lewis was still a casualty of the situation. I didn’t see a stewards decision on that. From my understanding of the orange zone, it should have been submitted for review?

Quali started, drove out of the pits, power went out... Took 10 min to cycle the routers back on correctly.
All in all I thought it was a pretty good race. Big thank you to the smart guys who stood still in the hairpin so everyone could file through slowly.
0 x
Top

Mark_MacDonald wrote: Quali started, drove out of the pits, power went out... Took 10 min to cycle the routers back on correctly.
All in all I thought it was a pretty good race. Big thank you to the smart guys who stood still in the hairpin so everyone could file through slowly.

I wondered why you were in the back with us. Haha! Glad you were able to get back in the race. I lost power last night too, but thankfully it waited until after the race.

Couple things from last night: As Mark said most people did a great job following incidents by locking the brakes and staying put until it was clear. However, as I was driving through the mayhem at the hairpin, I had one of the spun cars drive cross the track right in front of me. I assume he was just trying to get out of the way, but I was lucky to stop in time, and even luckier to not get rear-ended when I did. I know everyone wants to get going ASAP after a crash, but you do not have the right to cause further incidents because you are impatient. Please lock the brakes and check your relative box until it is clear.

Blue flags. At the end of the race we had some people complaining about respecting blue flags, and I assume it was directed at me. I'm addressing this here and not in PMs because everyone needs to hear it. For the millionth time, a blue flag means I have to let you by. That means I have to be predictable, not block or defend, and give you room when you make a move to pass. I followed all of those rules. A blue flag does NOT mean I have to pull over or slow down, and give up my race, regardless of what position I'm in. It is still the responsibility of the faster car to make a move and complete the pass safely. I was not racing you. I was racing the guy I was trying to catch. If I hadn't been close enough to catch him by the end of the race, I certainly would have made it easier for you to get by. I'm happy to make it easy when I can, but dealing with traffic is part of racing. You fast guys should have no problem getting by if you take the initiative, so stop whining and acting like the rest of us are just doing parade laps.

Oh and 3 times, twice in qual and once in the race, I had this happen: A faster car gets behind me, flashing their lights and acting like it's super urgent for them to get by me. In the qual instances, I gave up my lap and let the car by only to see them dive into the pit right after.

Seriously? I gave up my qual lap to let you by just so you could pit?! Same thing happened in the race. 2 laps to go, I have a blue flag and the car is apparently desperate to get by. I had already been held up by the blue flag passes of the other cars, ruining my chances of catching the car in front, so this time I slowed down to let him by. Does he race on and continue his battle? Nope. He dives into the pits.

This attitude that your race is the only race that matters has to stop. If you won't show others respect and courtesy, why should they do it for you?
4 x
Top

A little off topic but thought I’d ask the community here. Have any of you guys suffered memory access errors from iRacing since the update? I’ve had like a 33% chance of the sim crashing running the P2 car since I’ve started racing it. Seems like 100% of the time during league events, since I had the same problem at the last round.
0 x