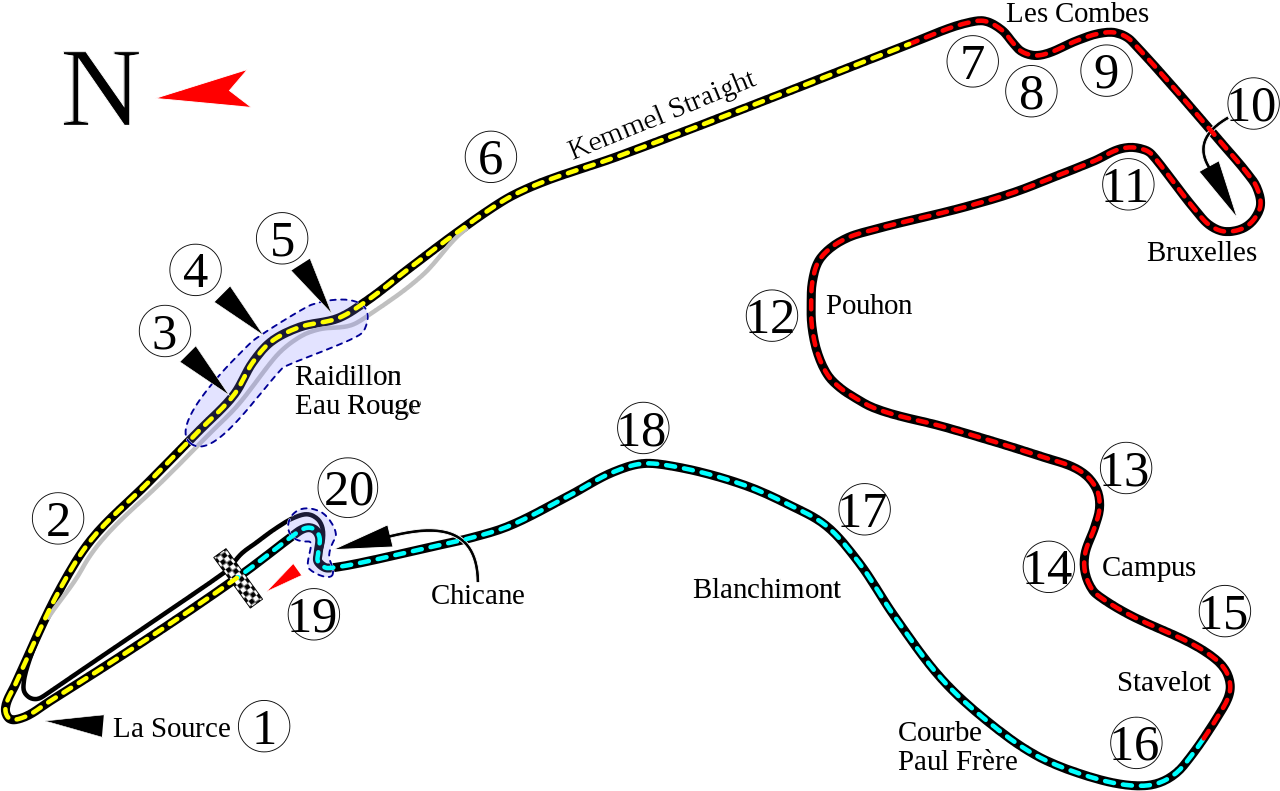 Just so everybody is aware, this track map is incorrect. We will be running the historic version of Spa. Yes, that huge 8 mile long one lol

Season 9 of our famed Tuesday night PS4 GT3 league busted out the DeLorean and traveled to 1940s Belgium to race on the Historic, infamous, and very dangerous old Grand Prix layout of the Circuit de Spa-Francorchamps. This 8-mile long ride through old farm towns is as deadly as it is beautiful, which was the main reason why the track would be boycotted by top organizations many times throughout the first 30 years of existence, due to the risks, before it because the famed circuit we now know. Before the race, our broadcaster was to have a chat with driver Mark Kaelin (Bubba18) as part of our new Driver Showcase interview to help our fans get to know the drivers they see on a weekly basis. That interview can be found HERE.

Tyler McIntosh (MacAttack0922) qualifying streak continues, capturing all 9 Poles on the Season and bumping up his Career League Record to 19. In a personal best effort, Mart Boissonneault (Addiktd) grabbed the 2nd spot, edging out Logan Hornbuckle (OneEyedLogo) by a slim 0.155 secs. Kyle Spencer (KDawgHonda777) and Mark Kaelin (Bubba18) rounded out the Top 5.

This would be a race of survival for the field. 1 slip up could cost you seconds on a lap, and 1 slip that resulted in damage could cost you minutes. Even with the price so large to pay, each driver was pushing their cars to the limit for this race. The first half of the race saw Tyler lead until the pit cycle would happen, with Logan riding in 2nd and Kyle securing 3rd after a merry go round of drivers held the position early. Tyler was the first to pit for fresh tires and was looking like he would have the race in hand, until that pit stop put him back in the field. Tyler would end up suffering damage trying to avoid a lapped car who has just wrecked, and just like that, the race was back up for grabs as Tyler made a 2nd pit stop. Logan would inherit the lead and make the most of it, gaining up to a 18 second lead. Then with just 3 laps to go, Logan would make a costly error which resulted in damage and his lead disappearing. On the penultimate lap, Kyle would catch and pass Logan, but Logan would use the slipstream to stay close for a last lap battle. Logan made a passing attempt which resulted in contact and damage for both drivers, but Kyle was able to keep momentum and take the lead. This however allowed Tyler to catch up to both drivers, but the unforgiving Spa Historic would bite Tyler one more time, costing him a podium finish and a shot at the win. Kyle then ran the hardest 90 seconds of his career to expand that lead and take home his 1st Career win in the GT3 League, ending his streak of 10 runner-ups without a win. Logan would cross the line in 2nd place, as Mark McCormak (RPG) would capitalize on the last lap carnage and round out the podium. Tyler would capture his 17th Career Fastest Lap of the Race. PJ Vergnetti (Jajalynx) would recover from a qualifying disconnect, and start at the rear of the field, to go +5 on his way to a Top 10 finish and winning the Hard Charger Award for Historic Spa.

In the Driver's Championship battle, Kyle Spencer (KDawgHonda777) used his win to eat into teammate Tyler McIntosh's (MacAttack0922) lead, dropping it to 28 points now with 3 races left. Mark McCormak (RPG) used his podium to jump ahead his teammate Mark Kaelin (Bubba18) to take over 3rd in the Standing by 9 points. Chase Cavalier (Doge_With_It_420) rounds out the Top 5.

The Team Championship standings saw Apex Motorsports (Tyler and Kyle) is now up to 75 points over Pony Up Racing (Mark Mc. and Mark K.) with 3 races to go. While the lead is comfy at the moment, it could be completely erased in 2 races if everything went right for Pony Up.

Next week will be yet another first for the GT3 League as we travel to Japan to tackle the Fuji Speedway. Each week, please join our League's Broadcaster Charles Sumner (Hootius; www.twitch.tv/oldmanhoot ) as he breaks down all of the action that happens each Tuesday night @ 9PM EST.

Here is the broadcast of the great actions from Historic Spa:
https://www.twitch.tv/videos/219530572