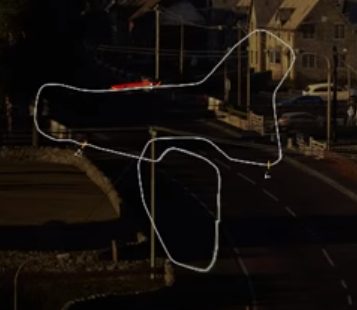 **Pre-Race Interview**
1. No more hiding from it, it's time for Bannochbrae! How do you plan to attack this track?

3. My wife didn't let me go out in Hurricane Irma and toss a ball, but the last Hurricane I was in 12 years ago I threw a Nerf Vortex 130 yards in the air thanks to a great back-wind. Do you have any obscure sports feat that you like to brag about?

1. No more hiding from it, it's time for Bannochbrae! How do you plan to attack this track?
I feel comfortable with this course now and knowing the layout and braking points, but I still am experiencing random violent spinouts (like instant ones and you have no chance at all to save), even when I have the wheel completely straight. It is super aggravating and something I am still working on fixing through my set-up.

3. My wife didn't let me go out in Hurricane Irma and toss a ball, but the last Hurricane I was in 12 years ago I threw a Nerf Vortex 130 yards in the air thanks to a great back-wind. Do you have any obscure sports feat that you like to brag about?
36 bowling games with all but 1 strike. Still working on that damn 300. More depressing to brag about than slinging that Vortex lol

Honestly I plan on going balls to the wall. I have had a terrible season as far as I am concerned. I have a lot of pace I think for this track so my goal is a hat trick.

[font=Verdana, Helvetica, Arial, sans-serif]3. My wife didn't let me go out in Hurricane Irma and toss a ball, but the last Hurricane I was in 12 years ago I threw a Nerf Vortex 130 yards in the air thanks to a great back-wind. Do you have any obscure sports feat that you like to brag about?[/font]
Nope.

[font=Verdana, Helvetica, Arial, sans-serif]1. No more hiding from it, it's time for Bannochbrae! How do you plan to attack this track?[/font]
I just plan on attacking with my normal plan. Keep the nose clean and just plain Endure and Survive.


[font=Verdana, Helvetica, Arial, sans-serif]3. My wife didn't let me go out in Hurricane Irma and toss a ball, but the last Hurricane I was in 12 years ago I threw a Nerf Vortex 130 yards in the air thanks to a great back-wind. Do you have any obscure sports feat that you like to brag about?[/font]
[font=Verdana, Helvetica, Arial, sans-serif]Nothing really obscure. I did used to play competitive paintball from 2001-2007 and had a paintball get caught in one of the folds of my pants at my knee and didn't break. That was pretty insane.[/font]

Q:3rd
Not happy with the lap, but happy with the result. No way at all I could push to the 10's like Mac, I had my car set-up way too conservatively, but I felt I left a good second out there and could have been in the 12's.

R: 3rd
Just like quali, not happy with my performance, but happy with the race result. Unlike the last few races, I did not show up looking to win, only looking to survive with the championship on the line. I had 2 early spins and pitted on Lap 6 for repairs, since I knew I had the tire wear to make it to the end of the race on my 2nd set. Was very conservative from there and had a clean 13 laps, until I spun it twice on the last lap, but knowing I had a safe gap to work with and keeping the podium. Just happy to walk away with a decent lead, and looking forward to the final race ever for this game at Barcelona next week.

Q: 1st
There isn't much to say about qualifying. My time was good enough for pole, but unfortunately I wasn't able to get the goal I had for myself. It is what it is.
R: 1st
FINALLY. This season, having been plauged with phenomenal qualifying and disastrous finishes, I managed to bring it hope cleanly on the most dangerous circuit of the calendar. I hope to repeat next week,  although it will be very tough because I expect everyone to be much closer, Pitricio is coming, and lets be honest, everyone will be playing project cars 2.

Q:13
R:9
I'm just glad this one is over. Been too busy recently to actually get any practice in. This definitely puts a hurt in my championship points but at least it's another top 10... I guess. 1 race left then on to P.Cars 2. OMG I'm so SO SO SO EXCITED
[youtube]2p4bkIUz4J0[/youtube]

Just realized I'm only 2 points up on riteaidkid going into the final race to keep 6th in the championship. And barring no DNF from mac. Top 5 is out of my reach now

While the drivers may have been excited to soak in the beautiful sights of Scotland farmland, doing at 150+mph over treacherous bumps and a road barely wide enough to hold 2 cars is not exactly how you would want to take in the scenery. But that is exactly what we got while racing the Bannochbrae circuit this week.

There was no drama for the Pole this week as Tyler McIntosh (MacAttack0922) scorched the field and put down an amazing lap on this challenging circuit. For Tyler, this marks his 6th Pole of the Season, which is a new league record!!! The Battle for 2nd thru 5th was a tight one as all 4 drivers were all within a second of each other. Past Champion Mathieu Blais (Mats35R) returned for this race and took the outside of Row 1, as title contenders Charles Sumner (Hootius) and Kyle Spencer (KDawgHonda777) took the 2nd row (for the 4th time this season), and with Vince Nadal (TSpottr723) rounding out the Top 5 in qualifying.

Right off the line as the Green light hit, Mathieu had a great jump and was able to take the lead away from Tyler by Turn 1. Unfortunately for Mathieu, the remainder of the 1st lap would prove to be a little to eventful for him as he would make contact with a couple barriers, which lead to Tyler making the overtake to get the lead back, and Mathieu's car suffering damage that would eventually lead to his retirement of the race. From that point, Tyler never looked back and dominated the race. In a season in which Tyler has had less than stellar finishes by his own standards, Tyler flexed his muscle to prove that the Defending Series Champion is to never be taken lightly. As Tyler ran away with the race, eyes were also on Charles and Kyle to see how the championship points would play out. Kyle would prove to have the better race pace and take over 2nd place in the first half of the race, as Charles was taking a conservative approach to the race. For Kyle, this was his 6th runner-up finish of the season, and was able to shave a few points off of Charles' lead going into the Series Finale next week. Teammates Mark Miller (Mark_LD) and Vince rounded out the Top 5 respectfully. For the 5th time this Season, Dallas Johnson (Porq_Chopz) took the Hard Charger Award as he started dead last in the field, and move up into the Top 10 by time he took the checkered flag.

In the Driver’s battle, Kyle Spencer (KDawgHonda777) lowered Charles Sumner's (Hootius) lead down to 15 points heading into the Final Race. Charles can clinch the championship with a Top 10 finish, no matter how Kyle finishes. Vince Nadal (TSpottr723) now sees himself just 2 points back over the absent Patricio Campos (Pitricio) in the battle for 3rd. Vince and Patricio will pretty much be racing heads-up in the Season Finale for that points position. In rounding out the Top 5, Tyler McIntosh's (MacAttack0922) win now gives himself a 15 point cushion over his nearest challenger, Dallas Johnson (Porq_Chopz).

In the Team battle, Cromo Ramrod’s (Patricio and Charles) lead shrank to 32 points due to Attack Racing's (Tyler and Kyle S.) 1/2 sweep at Bannochbrae. Behind both drivers again having Top 5s, Vin Rin Racing (Mark M. and Vince) have clinched the 3rd position in the Team Standings for the Season, no matter what happens at the Finale.

Next week, the final league race for this wonderful game (before we upgrade to Project Cars 2!!!) takes place at the Circuit de Catalunya-Barcelona, with special guest Anthony Jobes (GameofJobes on both Twitch and YouTube) broadcasting and interviewing the Top race finishers, and the Top Points finishers. Please join us for the festivities and farewell to this final season in the original Project Cars.
You must log in or register to reply here.
Share:
Facebook Twitter Reddit Pinterest Tumblr WhatsApp Email Share Link
Menu
Log in
Register
Install the app
Top