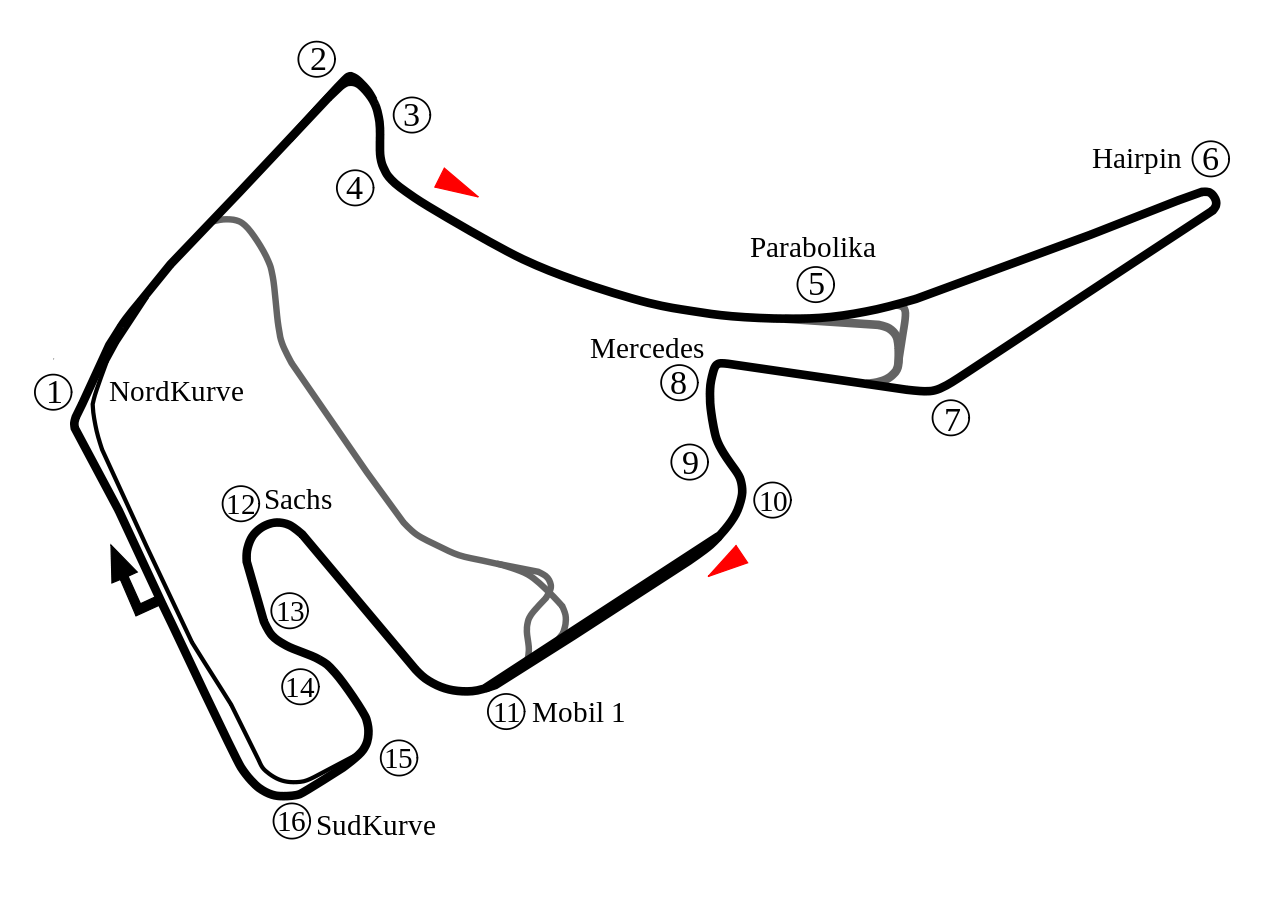 1. Hockenheim!!! How do you like this track? Which part of the track do you enjoy the most?

2. Last week I asked about tracks, this time it's the car. Which vehicle in Project Cars have you spent the most seat time in?

[font=Verdana, Helvetica, Arial, sans-serif]1. Hockenheim!!! How do you like this track? Which part of the track do you enjoy the most?[/font]
I'm not a HUGE fan of this track however I've grown to feel comfortable thanks to F1. I think turns 4 all the way to turn 7 is a fun section.
[font=Verdana, Helvetica, Arial, sans-serif]2. Last week I asked about tracks, this time it's the car. Which vehicle in Project Cars have you spent the most seat time in?[/font]
Audi R8 LMS 632.9 miles driven.

1. Hockenheim!!! How do you like this track? Which part of the track do you enjoy the most?
I really like this track a lot. it flows nicely and isn't too difficult atleast for me.

2. Last week I asked about tracks, this time it's the car. Which vehicle in Project Cars have you spent the most seat time in?
I know its the McLaren and probably a little over 100 hours in it.

3. NFL is back! Who is your team?
The Tennessee Titans

1. Hockenheim!!! How do you like this track? Which part of the track do you enjoy the most?
This track is... what it is. I don't hate it but it's fairly boring.

2. Last week I asked about tracks, this time it's the car. Which vehicle in Project Cars have you spent the most seat time in?
The BMW Z4 GT3. Probably 800 hrs?

3. NFL is back! Who is your team?
Don't care about football, but if I had to say what my team was, it would be the Tennessee Titans

**-Race Interview**
1. Hockenheim!!! How do you like this track? Which part of the track do you enjoy the most?
Fun race track even though I never had success there in F1.

2. Last week I asked about tracks, this time it's the car. Which vehicle in Project Cars have you spent the most seat time in?
It took a while, but the RUF GT3 finally overtook the SuperKart lol

**Post Race Interview**
Q: 3rd
Overall pretty happy with that considering I barely practiced at all in the past 5 days.

R: 1st
It was going to be a tough one with myself, Mac, Bubba and Kdawg with some pretty competitive speeds going on. I was fortunate enough to keep my nose clean and bring her home again, even though that LF tire was trying it's best to mess me up there at the end. Great race tonight and a personal thank you to everyone for the thoughts and kind words being sent with battling that Hurricane a few days ago. I am blessed things worked out the way they did and really hope that the rest of my fellow Floridians get all of their power back soon and we all can go on business as usual.

Q:9
R:6
Typical qualifying session. Decent but not great time putting me back in the pack a bit. During the race after a hectic first couple of laps. Things settled down and I basically drove by myself for most of the race again. Then on the 2nd to last lap with mac behind me at turn 7 I got loose and came down into him. Thankfully he was there to keep me from spinning even worse because I was trying to maintain that 5th place finish. Then on the last lap I overshoot turn 2 and gave up my 5th place to fife, that would be all she wrote for me and I ended with another 6th place finish and currently tied with mac for 5th in the drivers standings with 2 races left. Hope to get some great luck to get back up and keep this battle raging through the remaining tracks.
[youtube]Ii9C8LtD_lo[/youtube]

Prestige and speed was the name of the game as the crews put every Left Front tire to the test at Hockenheim this week.

For the first dozen minutes of qualifying Tyler McIntosh (MacAttack0922), Mark Kaelin (Bubba18), Charles Sumner (Hootius) and Kyle Spencer (KDawgHonda777) took turns trading the Pole around and only being separated by .2 secs. Then when the final lap hit, Tyler and Mark K. flexed their muscles and broke the 1:37 barrier. This was Tyler's 5th pole this season, and Mark K.'s best ever qualifying effort. Charles and Kyle shared the 2nd row together for the 3rd time this season, with Vince Nadal (TSpottr723) rounding out the Top 5 in qualifying.

When it came to the lead and the deciding factor on who would win, that only took 2 laps to really sort out, however it was a crazy 2 laps. Right off the light, Charles had a great jump and was able to take the momentum from the outside line of Turn 1 and complete the pass on Mark K. before the start of Turn 2. At this point, Tyler took that battle as a chance to open over a 1 sec lead early, but the curbing on the inside of Turn 3 bite Tyler and spun him into the wall. Tyler was able to continue with the damage, but lost a lot of pace until he was able to pit and repair it. With 4th place pretty locked up by the end of the race, Tyler made a late pit for fresh tires and on the very last lap, secured his 4th Fastest Race Lap award of the season. Back to the action, at the end of Lap 1, Charles was in the lead but the curbing in the last set of corners made him wiggle and miss the last turn, suffering a 5 second time penalty for leaving the track. Mark K. was able to take advantage of Charles' mistake and take the lead, however that would only last 1 turn as the curbing on the exit of Turn 1 spun Mark K. and caused him to make contact with the inside wall. Unfortunately that damage was very severe and cost Mark K. a chance at a solid finish after that great qualifying run. The remainder of the race saw Charles and Kyle run 1/2 for the entirety of the race, minus the lap or 2 of pit cycles. Charles was able to keep a little bit of a faster pace than Kyle, mainly due to the McLarens suffering from a little bit worse tire wear than the RUF this week. For Charles, this was his 3rd win in the past 4 races, and for Kyle, this was his 5th runner-up effort of the season. For his 3rd straight race he has been in, Vince survived the early onslaught of battles and had a solid rest of the race after that to round out the podium. The battle for 5th came down to the very last lap as Mark Miller (Mark_LD) overtake on Dallas Johnson (Porq_Chopz) in Turn 2 to claim his first Top 5 of this Season. While that late pass denied Dallas of a Top 5, it however did not prevent Dallas from taking the Hard Charger Award for the 4th time this season.

In the Driver’s battle, Charles Sumner (Hootius) extended his points lead over Kyle Spencer (KDawgHonda777) to 17 points with 2 races to go. Vince Nadal (TSpottr723) now sees himself just 14 points back over the absent Patricio Campos (Pitricio) in the battle for 3rd. Vince will have a chance to completely close the gap with Patricio missing one more race, before returning for the Season Finale. In rounding out the Top 5, Tyler McIntosh (MacAttack0922) 4th place finish has now tied Dallas Johnson (Porq_Chopz) for 5th place in points. But as the trend goes, neither driver can focus too hard on the other as only 14 points separate 5th through 9th in the points.

In the Team battle, Cromo Ramrod’s (Patricio and Charles) lead shrank to 55 points to Attack Racing (Tyler and Kyle S.). Behind both drivers having Top 5s, Vin Rin Racing (Mark M. and Vince) finds themselves comfortably in 3rd place in the Team standings with a 47 point lead over 4th.