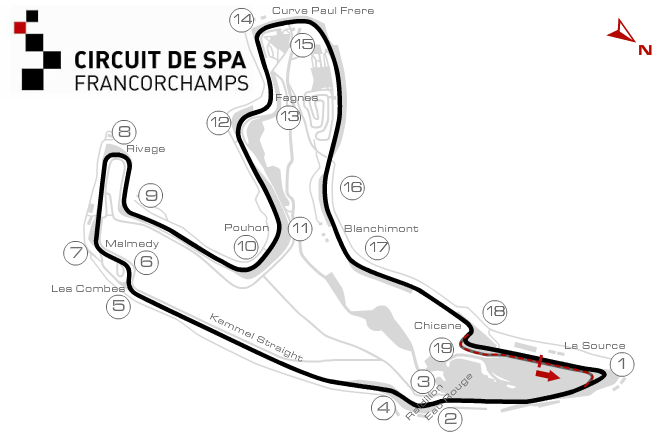 Welcome to Round 6 at Spa! Most of us know that Spa is a world famous circuit that has hosted a plethora of auto racing events for many years and it is also know that this track has never played any favorites with anyone. From it's legendary original circuit of 14.9 km /9.1 miles in length to the modern day circuit, Spa has been a huge fan favorite for many decades providing exciting race action for every aficionado that has had the privilege of attending or watching an event being hosted here. ​

The racing at Spa is a fast paced affair. Known as a draft track with its long Kemmel Straight, the notorious Blanchimont curve, Eau Rouge and the ever intimidating bus stop chicane, you need to be on your A game the entire race or you will find yourself caught out of the competition and sitting on the side lines.​

As is always the case, lap one is going to be key to a successful race here at Spa. I will mention this again as was mentioned back at Imola during the brief drivers meeting, "GIVE EACH OTHER SPACE TO RACE!!!" Your tires on lap one whether you want to believe it or not are cold and have less grip than 3-4 laps into the race. Going into La Source, up Eau Rouge and through the Les Combes complex is going to take precise skill and more importantly, situational awareness, to be successful in the opening laps. Into Puhon, do not be surprised if you see anyone who is over-ambitious lose it into the off-track area. Seriously guys, take it easy and don't over-drive on the first few laps. Settle into a rhythm and then start to plot your race strategies. It's an hour long race so there is plenty of time to race if you're on pace. This is also a reminder yet again that the entirety of lap 1 is an Orange Zone. If you cause a wreck, you will receive penalty points. It's just that simple.​

The pit entrance at Spa is just as you come out of the right-hander of the bus stop chicane (Turn 19). When we reach the pit cycles, make sure that you are aware of your surroundings. If you are pitting, announce it on voice or via text if you have a button mapped for it. If you don't and do not use voice, map a button for text (Pitting In)! It will alert the drivers behind you to be a little more cautious going into and coming out of the last turn chicane. ​
Likewise coming out of the pit lane, you should be aware of who is out on track, stay to the far right up against the pit wall to avoid anyone who is coming out of La Source. Likewise for the drivers out on track, be mindful of cars exiting the pits. Do not get into them as they exit as they have the right to be there. Find your way around them.​

All other racing is fair game. Remember that if you are faster than a competing driver, it is "YOUR" responsibility to find a way around them without contact. And if you are being passed by a faster driver, do not block or pinch in an attempt to stop the pass. Also remember that you are allowed one move either to the inside or outside to defend your position and this cannot be accomplished within the braking zone. Don't be that guy. And another reminder that flashing your lights in an attempt to have someone get out of your way is not allowed. You may only flash your lights "ONCE" to let someone know you are there and attempting a pass, but that's it. Remember that flashing lights is a protestable offense if abused.​

We are nearing the end of another season and for the most part from an Organizers perspective, it has been a good season. One of the best so far in terms of competition and community building. The next season will be here before you know it and we should start seeing some information to that regard posted in the forums soon.​

Let's get out there and give them a good show. Remember that this series is broadcast on the GSRC channel. Invite your friends and family to watch live and cheer on their favorite driver. That is all.​

No hosTed session tonight, but I'll have one next Monday, the 27th!
C

My load cell in my brand new Clubsport V3's is already Junk. Fanatec Customer service is extremely slow right now and I highly doubt the new load cell will get here before September. So ill be pulling out for the remainder of the season. Hopefully will see you all again next season.

Christopher Pfeffer said:
My load cell in my brand new Clubsport V3's is already Junk. Fanatec Customer service is extremely slow right now and I highly doubt the new load cell will get here before September. So ill be pulling out for the remainder of the season. Hopefully will see you all again next season.
Click to expand...

Damnit. I'm sorry to hear this. I always look forward to fighting with you on the track.
R

Im with bad luck...2 races that guys in front of me died and killed me

I got SO, SO lucky to miss Javi when he spun. I did that same thing in practice. Just clipped that curb a little bit with the LR and spun it. I couldn't have missed him by more than 6 inches. I saw him start around and let off the brake just a touch and I'm like, "Oh my Holy God no." I just turned it right and was prepared to take it through the grass if I had to. Saw Abner hit him in my mirror and figured that was going to be big and it was.

Certainly can't be displeased with P3 but I agree, too much wrecking. Racing deal for sure with Javi. Bruno out braking himself and taking Rodrigo out likely cost Rodrigo the win. Saw your wreck on replay Rafael and I'm not sure what else you could have done. Lousy all around.

I think yours was down to the nature of the track with the draft. That's part of the reason I don't care for these draft tracks so much... Well that and I'm not good at Spa. I had a 6th or 7th place car at best.

But, I had a 7th place car and finished 3rd. Certainly wasn't with outright pace which underscores your point too. These are an hour race. Let everyone else fling themselves off the circuit and you can wind up with a good run.

I was going to be content with 4th. I knew Rodrigo was 0.3-0.5 a lap faster so when he got to me I wasn't going to fight him too hard. That was an amazing comeback. Gutted for Felipe. I made that mistake at Sonoma last season and threw away a top 5. He might have thrown away a win so it's even worse.

All in all, glad to get out of there. Now we're back to the States for another round of draft madness at Road America.

rrusso said:
I'm with bad luck...2 races that guys in front of me died and killed me

I hope we all can do better in the next rounds
Click to expand...

One of the biggest reasons that I try and drive home the point to give each other space to race. Surprisingly, and to my delightful surprise, we had a clean lap one. I did the review right after the race and there were no reportable incidents on lap 1. Unfortunately, just after we crossed the line to start lap 2 and up  through around lap 6 is where things went south.

While we have made leaps and bounds forward in terms of the quality of racing, I feel we still have a way to go. We need to remember that at 1 hour, there is a lot of racing to be had. And even if you're not at the very front early on, chances are that with some speed and consistency, you will end up in a pretty good position in the end.

Let's all keep that we are building a community in the forefront of our minds guys.

Last night for me personally was a great race with lots of edge of the seat racing early on. A few code browns, etc., etc.