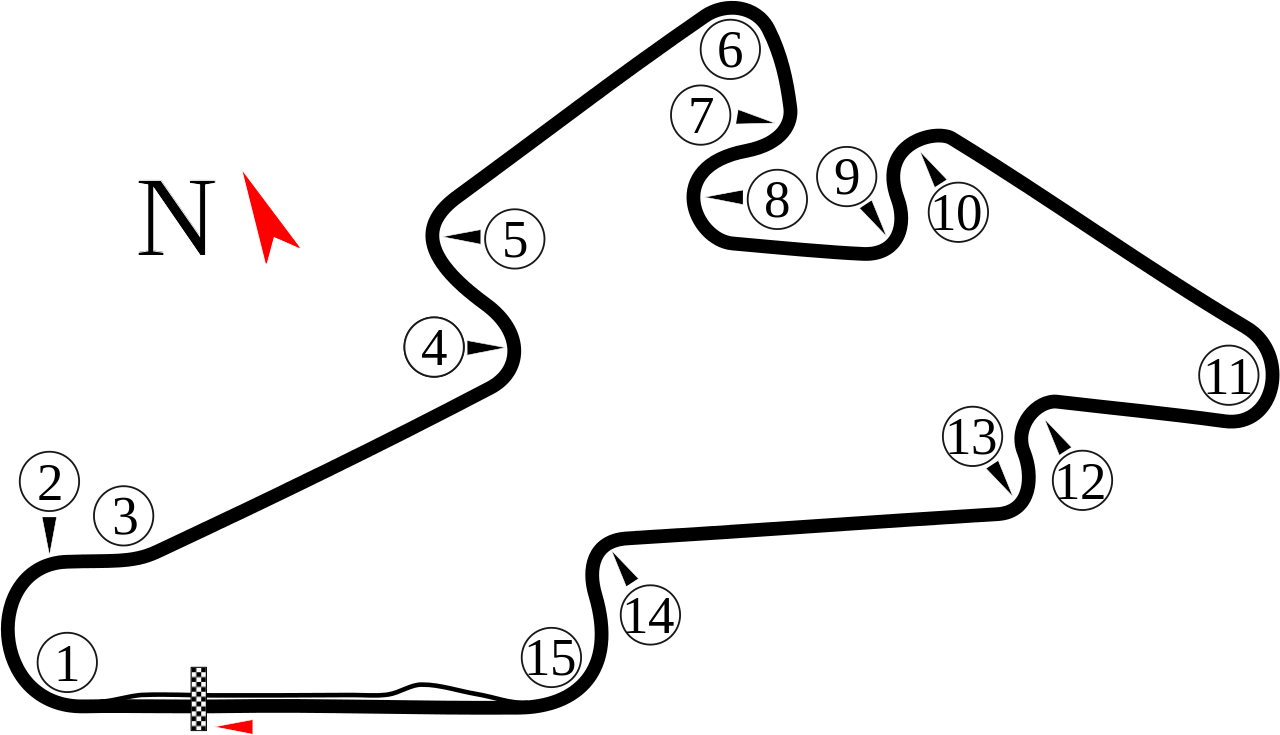 **Pre-Race Interview**
1. This week Brno will be a first timer to several drivers. How do you like this track?

2. Outside of Indy Cars since that will be it's own league, is there any other class of cars in PC2 that would peak your interest?

3. Which driver did you grow up idolizing, the one who got you hooked into any type of racing?
K

1. This week Brno will be a first timer to several drivers. How do you like this track?
I am one of the first timers, and have only put down about 15-20 laps so far at Brno. I find it really challenging and fun. It's not a pusher circuit like last week, you need to be smooth and patient. I still need to shave about 2 secs off my current pace to keep up with the top dogs.

2. Outside of Indy Cars since that will be it's own league, is there any other class of cars in PC2 that would peak your interest?
Really, maybe GTE at most, but still nothing really interests me as much as GT3. There would be a different answer out of me.... BUT THOSE A-HOLES GOT RID OF MY SUPERKARTS!!!!!!!! lol

3. Which driver did you grow up idolizing, the one who got you hooked into any type of racing?
Being young and impressional in the late 80s/early 90s, Dale Earnhardt and John Force were untouchables to me (and still are). I could ramble off some local dirt and drag guys that I watched every weekend that no one else has ever heard of, but even then they couldn't hold a candle to Dale and John.

[font=Verdana, Helvetica, Arial, sans-serif]1. This week Brno will be a first timer to several drivers. How do you like this track?[/font]

No clue, I'm one of the first timers and have yet to spin any practice laps. Sadly I'm going to be busy working super late tomorrow as well so it looks as though my only practice will be coming Tuesday prior to the race. Hate that it has come to this but had a last minute change in schedule and had my son this weekend when I was plannin on practicing.

[font=Verdana, Helvetica, Arial, sans-serif]2. Outside of Indy Cars since that will be it's own league, is there any other class of cars in PC2 that would peak your interest?[/font]

I think besides the Indy Car series, I think if there were a way to do a multi-class race or have a chance to do a rally cross league (Depending on how crazy that gets) would be fun.

[font=Verdana, Helvetica, Arial, sans-serif]3. Which driver did you grow up idolizing, the one who got you hooked into any type of racing?[/font]

[font=Verdana, Helvetica, Arial, sans-serif]I grew up with Dale Sr. as my favorite driver all around. Can't say I've come across another driver that reached that level of fandom from me.[/font]

Good race everyone, I had a lot of fun in the firsts laps with Macattack, until he disconnected from the race.
Nice race of Hootius with his 4th place, which means a 1st and 4th place finish for Cromo Ramrod.

Q: 5th
I was fine with that. All of my practice went towards race trim, so I wasn't expecting much here.

R: 4th
Pretty disappointed with the race. I thought I was going to be ok, but ended up having a 6th place car, and lucked into a few extra spots. I knew this place was tough as hell to pass and on tires, so track position would be king. Had a good start and tucked in behind KDawg. After a handful of laps, Kyle was right on our tails too. KDawg got squirmy on a curb, and I went to the outside to try an overtake. Kyle ducked in behind KDawg on the next turn and I had to give up the spot. And that was all she wrote. Kdawg and Kyle ran very clean races and I used up the LF trying to push hard to make a move. Gratz on Pitricio on another win, and gratz to the 2 Kyles on the podiums, you guys deserved it.

Q:10
R:5
Well, I had another so-so qualifying run, I just couldn't seem to find the pace I needed. This track was so new to me I had only ever raced here in the MotoGP games and never with 4 wheels and a cage. Seeing so many disconnects throughout the sessions had me nervous. But all in all I ran a race basically on my own and only really had any battles with dray a few times. A pretty boring race from my perspective. But, not only did I get my best PRL finish and first top 5 but I do believe I worked my magic and got co-hard charger of the race again.
[youtube]XjsT1PFMCZU[/youtube]

This week the boys visited a rarely seen track for this series, going to the Czech Republic and battling the very demanding Brno Circuit.

By how competitive our qualifying has been this season, it was a shock that the Pole came down to only just 2 drivers who had a significant time advantage over the rest of the field. However what wasn't a shock, is that those 2 drivers were Tyler McIntosh (MacAttack0922) and Patricio Campos (Pitricio), and that once again the difference between those two was less than a blink of an eye. Tyler just clipped Patricio by .050 to claim his 3rd Pole of the season. Kyle Spencer (KDawgHonda777) comfortably took the 3rd position, while Mark Kaelin (Bubba18) and Charles Sumner (Hootius) rounded out the Top 5. Congratulations to Mark on his career best qualifying effort in the GT3 League.

As soon as the green lights hit, Patricio had a great jump and was able to take the inside lane going into Turn 1, and held onto the pass to take over the lead. Brno is a very tough track to pass at, so this might have been the key to the race, had disaster not struck a handful of laps later to make it a null point. While running in 2nd and within striking range of Patricio, Tyler's PS4 unfortunately just shutoff without any warning. This was another terrible break this season for our defending champion, which almost became worse when Tyler's car was still on the track traveling out of control going into Turn 1, and came very close to wrecking into Patricio. Luckily for Patricio, the disaster was avoided, and he would drive to a very dominating win, his 4th of the season. As that all played out, the main battle was for the eventual 2nd and 3rd positions. Unfortunately for Mark, an apparent game glitch gave him early issues and took away from his great qualifying effort. Midway through the first tire stint, Kyle S., Charles and Kyle E. were all running nose to tail, waiting for one another to slip. Kyle S. had issues on the exit of Turn 1, which gave Charles the right side of the straightaway, which then would turn into the outside of Turn 2. Kyle E. took advantage of that and tucked in behind Kyle S. in the preferred inside line, and was able to make the overtake on Charles. That would be the end of their battles as all 3 drivers ran clean races with no offs or spins from that point. Kyle S. would bring home his 3rd runner-up finish of the Season, as Kyle E. snagged his first career podium. To round out the Top 5, that spot would go to one of our Hard-Charger of the Race winners, Dallas Johnson (Porq_Chopz) who snagged his first career Top 5. Our Co-Hard-Charger for the Race goes to Max Lewin (RiteAidKid84), who jumped up to finish 7th from his 12th place starting spot.

In the Driver’s battle, Patricio Campos (Pitricio) increased his lead over teammate Charles Sumner (Hootius) to 21 points, which is huge considering that is a whole race worth of points with only 4 races remaining in the season. Kyle Spencer's (KDawgHonda777) strong finish at Brno took advantage of Vince Nadal's (TSpottr723) absence and retook 3rd place in the points, now 11 points back of Charles. Kyle Ely's (Rocckson2Kyle) podium finish moved him up into 5th in points, yet only 6 points is the difference now between 5th and 9th place.

In the Team battle, Cromo Ramrod’s (Patricio and Charles) increased their lead now to 75 points over Attack Racing (Tyler and Kyle S.). At this points, even if Attack Racing goes 1-2 in the remaining 4 races, they will still need some help to be able to close the gap. Vin Rin Racing (Mark M. and Vince) rounds out the Top 3 teams.

Next week will not be any easier on the drivers or tires as the crew heads to Belgium to tackle the Zolder Circuit.

Very special thank you to AJ Jobes (GameofJobes) for donating his time to the league and broadcasting for us. You can find Jobes’ other great broadcasts and racing at www.twitch.tv/GameofJobes