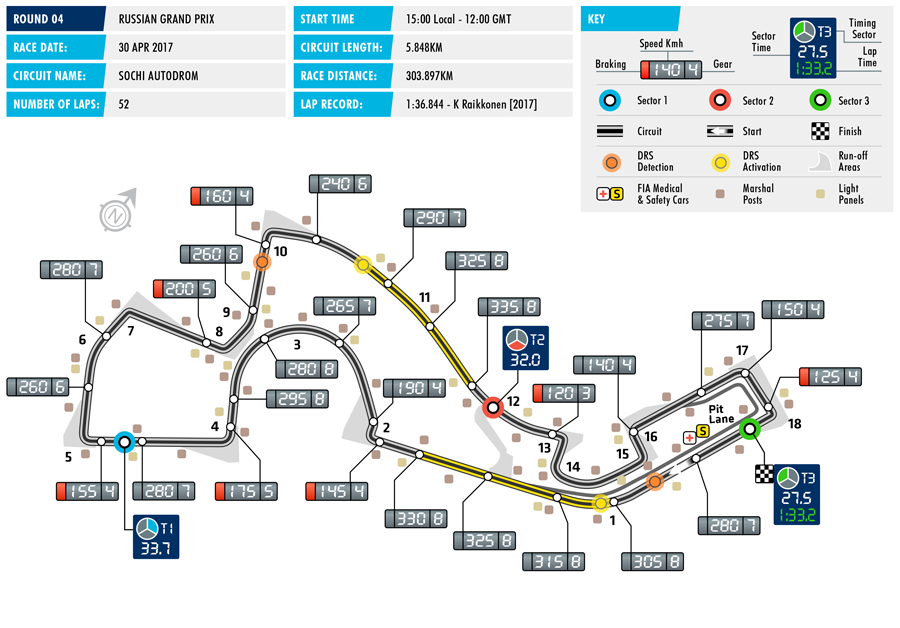 Division 1:​
Session host is Michemery​
Qualifying starts at 7:00pm (UK time) followed by the race​
Division 2:​
Session host is Macca​
Qualifying starts at 7:00pm (UK time) followed by the race​
Fact File:
[ul]
[li]Division 1 has always had 3 drivers from different nationality's as the front 3 of the grid[/li]
[li]Slow start for the Division 1 Toro Rosso team, both drivers scored a lot of points in their debut season, Gary scoring 10 times in his 13 races, but both drivers have got off to a slow start, with only 3 points between them so far[/li]
[li]Switchblade has the worst point scoring record of any Division 1 driver, having only been in the points in one of his last 9 races (Brazil S14)[/li]
[li]Stevo_F1X is the only driver in Division 2 to have been on the podium on both occasions so far[/li]
[li]Armytricks has lost more positions from starting position than anyone else in division 2[/li]
[/ul]
Pre-Race Questions:
Division 1
[ol]
[li]Around the division 1 paddock there seems to be a feeling that some of the driving has been unclean, quite a contrast from S14. What is your take on this, is there anyone your willing to call out and advise them to calm down?[/li]
[li]Again we come back round to Mercedes, last season McLaren (SSmithy_v and Light-e44) were the only team to score more than 30 points in one race weekend... Mercedes have already done it, scoring 33 in Bahrain. With the new patch helping no traction, could we see any other teams get above 30 points in one race weekend?[/li]
[li]Russia is a track with few overtaking spots, and isnt known for its wheel to wheel action. Which track in the calendar do you think will produce the best race? [/li]
[/ol]
Division 2
[ol]
[li]Downforce or straight line speed, what is more important for Russia?[/li]
[li]Given dirty air was bad in Bahrain, how bad are you expecting it to be in Russia? Will there be many overtakes?[/li]
[li]How have you found the game since the latest path?[/li]
[/ol]
​
I

My PSN updated now.
Could someone drive around here in a multiplayer lobby (seeing TT not best way to compare as tyres don't worsen etc) and post it on youtube? I'm going to do the same and if would allow me I'll try edit quickest lap together with mine.
This may help me learn to drive better and have a go at editing using vegas pro thing.
O

Corner 13 on here scares the absolute life out of me. I may end up putting racing line on for this race as it always catches me out. I misread the distance boards all the damn time

Comments on the fact file: Very surprised at all the division 1 facts, i thought there would have been atleast one race so far where we would have seen atleast 2 spaniards, brits, or germans on the front row.
Also surprised Gary and Racer havent hit the ground running like in their debut season, albeit this grid is even more competitive but Gary was very racey in the Beta.
Finally a bit surprised about switch, he is notorious for not finishing races, but i did think he would have a better point scoring record, as his 1 lap pace could easily see him in the Top5 at some tracks.
Pre race Answers:
[ol]
[li]I feel bahrain was difficult to judge, with such a laggy lobby i think a lot of incidents could have been due to de-sync issues. However with these new cars and shorter braking distances, less slipstream etc, overtaking is harder, so i think when the attacker is making a move, he has to be aggressive, as shaping up an opportunity can take a long time, so you need to take it when it comes. [/li]
[li]Yes definately, the team would only need a 1st and the other driver to finish top 7. With the lineup this season that is very possible for several teams.[/li]
[li]I think Spain could produce a good race, a nice flowing track.[/li]
[/ol]

1. Downforce or straight line peed. What’s more important for Russia?
Peed? Maybe that’s where McLaren have been going wrong all these years

3. How have you found the game since the latest path
Connection doesn’t seem to have been the best. I think Codemasters have defiantly gone down the wrong path, if you get what I mean #DrunkSmithy
N

1. It's not that bad tbh. My front wing got destroyed at bahrain but that was down to lag. The racing itself was pretty difficult at bahrain cause the 1.9 patch caused some d-sync issues. So the cars were all over the place. That d-sync issue wasn't just an prl problem, it also happend in many other leagues. No matter if Saturday or sunday. I just hope it's less worse this saturday cause last week was far away from being enjoyable

2. Yes. 4 teams can score more than 33 points in one race in my opinion. Mercedes, Ferrari, RedBull & Sauber. It's just really difficult cause the grid is very very strong

3. Don't really know. Many races have the potential to be epic
O

[/ol]
[font=Verdana, Helvetica, Arial, sans-serif]I'm running a balanced set up for this, I think it's more important to keep a set up you are happy with purely because unless you tear the tyres up you won't be two stopping. Personally I just want to get around with time penalties. [/font]
[ol]
[li]Given dirty air was bad in Bahrain, how bad are you expecting it to be in Russia? Will there be many overtakes?[/li]

[/ol]
[font=Verdana, Helvetica, Arial, sans-serif]I was about 30 seconds behind after binning my car into a wall. This is not relevant to me sadly! [/font]
[ol]
[li]How have you found the game since the latest path?[/li]

Downforce or straight line speed, what is more important for Russia?
Downforce

Given dirty air was bad in Bahrain, how bad are you expecting it to be in Russia? Will there be many overtakes?

Lots all mine going from last to first.

How have you found the game since the latest path?
Seems better glad my upgrades work on my McLaren in career now

As I'm exciting, I've changed my helmet for this race. 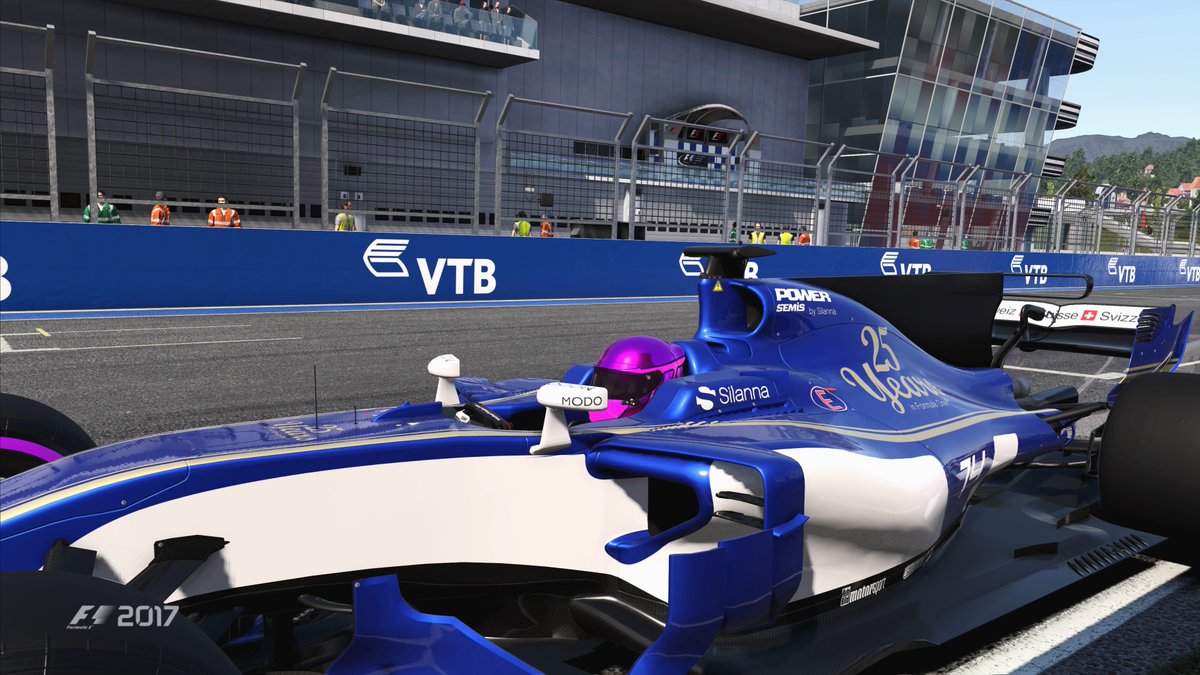 Also decided to do a little wager where I'll donate to Cancer Research UK.

Nice one Racing. Good luck for the race.
N

Hmm. Looks like that was my 400th PRL race as well. Cost me £10 and was pretty memorable.
https://www.youtube.com/watch?v=vlgudIfp01Q
N

RacingAtHome said:
Hmm. Looks like that was my 400th PRL race as well. Cost me £10 and was pretty memorable.
https://www.youtube.com/watch?v=vlgudIfp01Q
Click to expand...