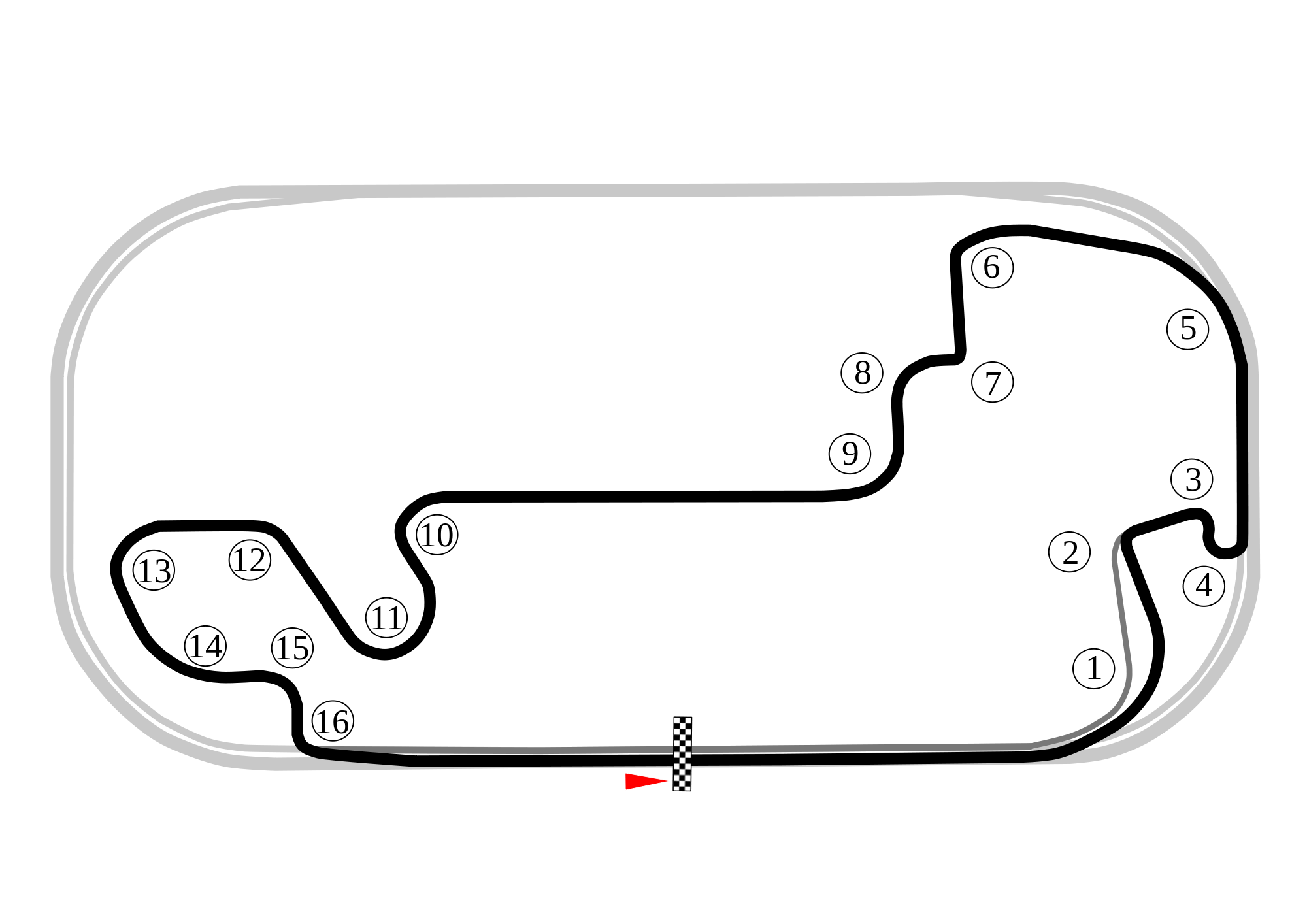 ***Pre-Race Interview***
1. On the Indy road course for hte first time in the league. How excited are you for this race coming off of a bye week?

2. We are 1/4 through the season. How do you feel about your results so far?

3. What game did you play the most last week with no leagues running?

1. On the Indy road course for the first time in the league. How excited are you for this race coming off of a bye week?
[ul]
[li]I am very excited for Indy. I really like this track and hope to continue doing well. [/li]
[/ul]
2. We are 1/4 through the season. How do you feel about your results so far?
[ul]
[li]I have been ecstatic with my results thus far. I am hoping to continue the streak into this week.  [/li]
[/ul]
3. What game did you play the most last week with no leagues running?
[ul]
[li]Project Cars 2. I practiced when I could for the endurance event at Daytona. I'd had great success up to this point in the endurance events and wanted to continue that streak![/li]
[/ul]

Also, The map above is backwards per the arrow. Turn 16 above is actually turn 1 and so on.

1. On the Indy road course for the first time in the league. How excited are you for this race coming off of a bye week?

•I’m excited to hit the track again and I’m enthusiastic about going to a track that my car can be competitive at. The Renault has a hard time at high speed tracks.

2. We are 1/4 through the season. How do you feel about your results so far?

•I’m very happy with the results I have acquired so far and somewhat surprised. I’m sure I can get better results if I can avoid the early race mid field incidents. The last 3 race starts have been painful for the me.

3. What game did you play the most last week with no leagues running?

•I just picked up GT Sport on Friday and I am in love with it. Gonna be hard to put it away to practice for the race tomorrow. Lol

I had an awesome time last night. I started 5th but lost the back end in the 2nd corner and dropped back to 12th. Much swearing ensued. I was able to fight back up to 5th and had some awesome battles along the way. The best one was with my teammate and went back and forth for a while! Couldn't have asked for a better first race with this league. I've played sims for years, but usually just single player, so I'm really excited to be part of this league. My girlfriend looked a bit concerned when her 36 year old BF ran upstairs to excitedly recap a video game race to her. I had to explain, "It's not video games, babe, it's sim-racing." LOL

Anyway, I'll stop rambling now. Congrats to the podium finishers! I can't wait for next week!

TheGreatC81 said:
My girlfriend looked a bit concerned when her 36 year old BF ran upstairs to excitedly recap a video game race to her.  I had to explain, "It's not video games, babe, it's sim-racing." LOL
Click to expand...

You can imagine the look on my wife's face when I tried explaining to her that 2 nights a week I do not "fake race", but I hop on just to watch and talk about other people "fake racing".  hahahaha

Season 9 of our famed Tuesday night PS4 GT3 league was back in action after a bye week for a very highly anticipated debut race at the Indianapolis Motor Speedway, tackling the road course layout. All of the excitement and anticipation was very warranted, as we experienced easily the most exciting race of the Season.

Tyler McIntosh (MacAttack0922) qualifying streak continues, capturing all 4 Poles on the Season. With his 14th Career Pole, Tyler is 1 away from tying Patricio Campos (Pitricio) for the League's All-Time record. Mark McCormak (RPG) took the outside of Row 1, with Kyle Spencer (KDawgHonda777), Mark Kaelin (Bubba18), and Dave Cristelli (TheGreatC81) rounding out the Top 5.

There was tons to talk about in this race, so lets start from the Lights and work our way to the Checkers in many scenarios. The field had a clean start with no contact causing normal first lap shenanigans. 2 driver though would clip grass and find their way all the way to the back, which would be our 5th and 6th qualifiers Dave and Mathieu Blais (Mats35R). Both drivers would recover and race their way back up through the field. Though it would not be easy as Chase Cavalier (Doge_With_It_420), Michael Caterino (vWardude), and Max Lewin (RiteAidKid84) spent a good chunk of the race trading positions back and forth with Dave and Mathieu, and giving the stream plenty of action and tense moments. Side by side action was easy to find, and in one daring occasion, almost 3 wide action occurred in the Esses of all places! Dave would end up winning a late race battle with Mathieu to take home the Top 5 finish in his debut race. While the mid-pack was full of action, our front runners would put on quite the show themselves. Off of the start, Tyler secured the lead and would open up a gap before the mid race pit stops, and Kyle would join his teammate in a great start and get around Mark M. Mark K. would also overtake Mark M. for a couple laps, before Mark M. would pass him back and and start the pursuit of Kyle to take 2nd place back. At this point, Mark K. would be about the only driver having a lonely race as he could not keep up with the podium finishers, yet he had plenty of pace over the gaggle of cars battling for 5th and would pretty much just run 4th for the rest of the race for a very solid finish. Mark M. would chase down Kyle and a great multiple lap battle would ensue, with both drivers trading paint, and 2nd place, back and forth. Mark M. would eventually win the war for 2nd, but that great battle would allow Tyler to open up a substantial lead... for the time being. As we hit mid race, Mark M. would be the first of the front runners to pit. The strategy worked out greatly for Mark M. as he would exit pit road and find plenty of clean race track in front of him to put down fast laps. Several laps later, tragedy would strike our leader Tyler as he would catch tons of curb and spin his car around trying to avoid a lap car. This event caused Tyler to lose about 13 secs on the track, which combined with Mark M. putting down fast laps, meant we would have a change for the lead after Tyler came in later that lap to pit. It took Tyler a handful of laps to catch up to Mark M., and then the battle for the win would ensue. Mark M. blinked first, just touching enough grass to ruin his momentum leaving the Esses, allowing Tyler to take the lead. Tyler then returned the favor in Turn 2 just half a lap later, catch a little grass and allowing Mark M. to take the lead back. Then it was a battle of wills. Tyler had a more aggressive brake set up which allowed him to gain on turn entries, but Mark M. would keep the momentum on turn exits. The chess game was on going as the pair would run up on lap traffic. With just 3 to go, Mark M. would take the inside lane lapping a car down the front stretch going to Turn 1. This position placed Tyler directly behind the lapped car entering the braking zone going into Turn 1. With his hard braking style, Tyler would end up running into the back of the lapped car, which then gave Mark M. the space he needed. The final 2 laps for Mark M. would be error free, and would see the Ferrari driver snag his 2nd win of the Season, and of his Career. While disappointed with the runner-up finish, Tyler would set the Fast Lap of the Race for a record breaking 13th time, giving him sole possession of that record for the League. Chase gained 2 positions in this race and would be our Hard Charger of the race, which was incredible for the fact that in a race where we saw so many overtakes and back and forth passes, that most drivers ended up floating back to their qualifying positions. This race was easily the most action packed and heavily contested race that we have had on Project Cars 2. Please make sure to check out the video at the bottom of this recap to witness all of the action.

In the Driver's Championship battle, Tyler McIntosh (MacAttack0922) expanded his lead overall, but with the win Mark McCormak (RPG) shot up into 2nd Place in the points, 16 back of Tyler. Kyle Spencer (KDawgHonda777) stayed in 3rd place, just 1 point behind Mark M. currently.

The Team Championship standings now has Apex Motorsports (Tyler and Kyle) saw Pony Up Racing (Mark Mc. and Mark K.) gain an inch... or more literally 1 point in the battle. The difference is now 24 points between the 2 teams who have separated themselves pretty heftily against the rest of the League.

Next week will be another first time visit for the League, as the crew heads out West to the streets of Long Beach to battle in the only street circuit race on the calendar. Each week, please join our League's Broadcaster Charles Sumner (Hootius; www.twitch.tv/oldmanhoot ) as he breaks down all of the action that happens each Tuesday night @ 9PM EST.