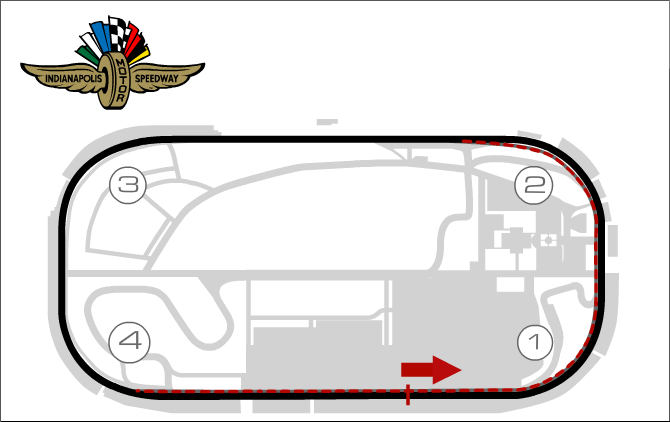 Q: 1st
It took us the entire qualifying session, but Kyle and I finally got hooked up to where our tires were ready and we could use the P2P take turns drafting off one another. Easily gave us a Car Ramrod front row.

R: 1st
It's weird to say that I had the best car, yet was gifted the win. My luck so far this season has been pretty nuts. It felt like I ran a really really good race though. I graze the wall and it gave me way too much damage when I was trying to miss Kyle when he spun in front of me. Had to make a pit stop that put me a couple laps down, but I ran a clean race after that. Got my laps back thanks up some cautions, and the last lap was what it was.

The 3rd race of our Inaugural Indy Car league took the crew to Indianapolis Motor Speedway, with everyone having dreams of kissing the bricks as we tackled 75 laps around the famed Oval.

Qualifying came down to the last minute to set the top spots. Teammates Charles Sumner (Hootius) and Kyle Ely (Rocksson2Kyle) found clean track, had their tires to temp, and used their P2P and tandem drafted off one another to take the Front Row. Charles ran the fastest lap of the 2, claiming his first ever Pole in a Project Cars League. Daniel Cervantes (Danny102897), Kyle Spencer (KDawgHonda777) and Aaron Webb (AaronWebb85) rounded out the Top 5 in qualifying.

The race started off with 2 quick back to back cautions, before we saw a very long, +50 lap green flag run. Right after the restart to the long green flag stint, that was the first case of issues that we saw for front runners. Kyle E. was able to get around Charles, but then clipped the apron and spun his car. Charles was able to avoid contact with Kyle E., but he brushed the wall and forced to pit for repairs and go a couple laps down. As that long green flag run progressed, one by one we witnessed lead lap cars make a mistake and take damage and be forced to pit. By Lap 50, Aaron was the only driver to keep his car totally clean and have the entire field a lap down. As the race came down to the last dozen laps or so, a few more cautions would come out. Charles ran a clean race after the earlier incident with Kyle E., and found himself in 2nd place when the multiple cautions came out. The wave around on each caution allowed Charles to get back on the lead lap with Aaron on the final restart with 5 laps to go. That final restart, Charles had to start behind all of the lapped cars for taking the wave around, and saw time running out as he was 6 seconds behind Aaron as the white flag waved. In a very unfortunate circumstance, Aaron had vehicle issues in Turn 1 which resulted in heavy contact in the wall which would not allow him to complete the last lap. As Charles drove through Turn 1, he had to make a quick evasive maneuver to dodge a lapped car who spun due to clipping the grass. That quick move kept the car intact and gave Charles his first Indy Car victory.  Aaron still was awarded 2nd place since every other car was multiple laps down. Tyler McIntosh (MacAttack0922) over came a couple damage pit stops in the race to finish off the podium. Aaron did prevent Charles from taking the Hat Trick for the evening, as he ran the Fastest Lap of the race with 2 laps to go. Mikhail Jackson (Mikhail24RD) was the Hard Charger of the Race, jumping up 5 positions from his qualifying effort for his 2nd straight Top 5 finish.

In the Driver's Championship battle, Charles Sumner (Hootius) took over the points lead with his victory, and sit 14 points ahead of  Daniel Cervantes (Danny102897). AaronWebb's (AaronWebb85) runner up finish pushed him into 3rd in the points, just 1 point behind Danny. Previous Points Leader Kyle Spencer's (KDawgHonda) DNF at Indy dropped him down to 4th in the points, with Rob Besaw (Xsyse) rounding out the Top 5.

The Team Championship widen just a little bit, as Car Ramrod (Charles and Kyle E.) increased their points lead over Gor-X Racing (Rob and Daniel L.) to 14. 3rd thru 6th in the Standings are still within a 1-2 of taking over the Team Championship lead.

Big thank you to Rob Besaw (Xsyse) who took the time to make a recap video of the race, which is linked below. Next week is an off week due to the Thanksgiving Holiday, and we will return on December 1st to tackle the very popular Laguna Seca Raceway. Each week, you can join one of several of our driver's who stream from their POVs.