1- After a good race at the Glen, we stay in America and head to Road Atlanta!  A more technical course that claimed its fair share of victims our last outing here, patience may be rewarded.  Do you think we will repeat last season and see a surprise winner here?

2- We have seen that pit strategy can play a role in the races.  Do you use a 3rd party app for fuel calculation?  Or fly by the seat of your pants and just throw fuel in and hope for the best?  ( I have only seen 1 person run out of fuel in the radical.  What a dummy right?)

3- Being a slow Sunday, I am having trouble thinking of questions.  So my 4yr old boy poses this question "How did you win the race?"  So lets hear it.  On Thursday, you somehow come out on top!  What series of events lead to your commanding victory?

Unfortunately, looks like I will have to miss this round. Wife has work obligations, and it will be a photo-finish if she gets home before race start. I will join and run if she makes it though.

Gunner said:
Unfortunately, looks like I will have to miss this round. Wife has work obligations, and it will be a photo-finish if she gets home before race start. I will join and run if she makes it though.
Click to expand...

Does your wife turn the wheel for you?  Or do you sit on her lap while she works the pedals?

You can have my mother in law come take care of the kids. She will probably still be at my house...........

CajunGrit said:
Does your wife turn the wheel for you?  Or do you sit on her lap while she works the pedals?
Click to expand...

LOL, how did you learn my secret? I can only imagine what my 4yr and 1yr old boys would get up to left unsupervised. House fires not out of the realm of possibility!

Maybe the best bet is to ship them to Tylers for a few hours... Get the most out of his in-laws!

Nope, just one in law. One meddling naggy in-law....

best babysitter in the world is Duct Tape and a closet, works well for kidnapping's also, just kidding, use nyquil instead no tape residue. :lol:

Duct tape doesnt have the adhesive to hold on to skin. Gaffer tape on the other hand.... melatonin does wonders too

DEADZERO said:
Duct tape doesnt have the adhesive to hold on to skin. Gaffer tape on the other hand.... melatonin does wonders too
Click to expand...


...and another thread is ruined before it began!
R

Hi Guys, for all you fast boys, what's a good to excellent Lap time for Atlanta??

This will be an interesting race. Road Atlanta is bumpy as we know and lots of elevation changes, things the SR8 isn't too keen on :lol:

This race will come down to setup again, definitely directed toward aero. I got lots of work to do this week, make sure to get some Radical Racing Challenge races in before Monday night. Get some racecraft in, even if its a fixed setup.

Side Note: Participation for the RRC @ Road Atlanta has been horrible, im hoping this weekend we'll get some official races with more than 9 cars going.

We raced road Atlanta last season. If you go to the archived forum for last season you can see what times we were running.

And it was a spin fest

I don't reccomend going to the old thread, you will be reminded that Paul won a race in the radical  :lol:

Guys ran 15's and 16's last season, we did run on a hot track though. Typically you won't see times way faster than the fastest guys in official, even with the open setup.  That can be track dependant though. Some tracks the iRacing setup can be quite competitive

I was thinking about that last night after I made my post. Just because open setup is faster @ Glen doesn't mean it will be faster at another track, its not black and white like that. Wish I could delete posts :lol:

Got you covered matty

I will be watching from the grandstands for this one gang, as my rig has officially been broken down, packed up, and ready for the move.
Then the wife made me paint it yesterday because she said it will never be apart again, so let’s get it done. So now 5yrs later with new paint the rig will be faster and im taking Glitter Pants down  :lol:. I will see everyone for round 3! 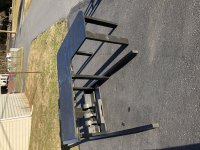 Last PRL practice I participated in before race:
http://members.iracing.com/membersite/member/EventResult.do?&subsessionid=25772912&custid=308605

I see others where Kenny got down to 15.2x, my best being 15.6x with Paul, Overbay and Erik in front of me. I think that was a clean track with very little use, no dynamic weather and maybe no dynamic sky so track temps were probably consistent. The lap times for official series practice are done on track state that starts at moderately low usage which is ~34% I think with race sessions starting at moderately high usage or ~58%+ I believe. Practice and qualifying will be much quicker than race times for us and as the track warms we will see times even in practice tick up closer to 17.x most likely.

The current setup in official series has wing dropped down to 24-ish. Last season it may have been closer to high downforce setup from a couple seasons ago which was 36-ish. Medium downforce was 28.4 which was my personal favorite setup and the one I used through most of last season in PRL series. I believe we all still have the low, medium, and high df sets available to us in garage if you check under iRacing setups. If not I have them and can share.

But in my opinion, the current setup is the best it's been for Road Atlanta. People are having quite a time keeping it between the lines in the 3 races I've done but I would bet it has more to do with corner entry speed being too high or a heavy foot on exit than a "loose" setup. This track accentuates all the nastiness of the Radical but it can be tamed. And when it is, that stretch from the downhill before s/f all the way through the esses is some of the best racing there is.