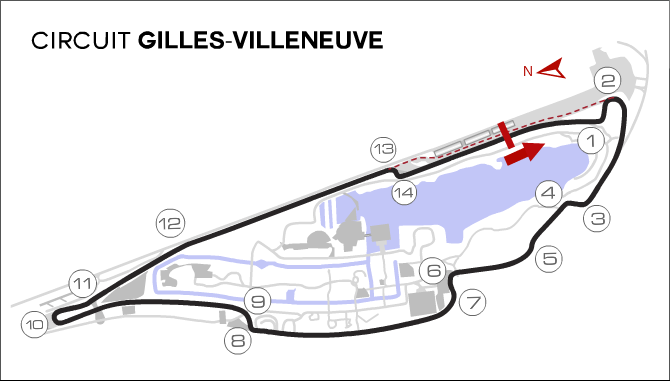 Pre-Race Interview
1. How was your first race last week at Spa?
2. What is your favorite part and worst part of Circuit Gilles Villeneuve?
3. If you would have the power to add a feature on iRacing, what would it be and why?

Pre-race Interview is up!

Friendly reminder that starting with this race, we will be doing rolling start.
X

Unfortunately, I won't be able to make this race. This should be my only absence.

1. Spa was great for me. Very clean, and even though I was a solid 1 to 2 secs off the pace, I remained consistent and finished 9 th.

2. My favourite part of Montreal is the turn 1-2-3 complex. So much time can be made here and flow is very important.

3. It would be nice if telemetry was available in game, without having to use 3rd party software.

Have a good race guys and see you in Italy!
R

1. How was your first race last week at Spa?
Not really good had like 6 spun out, I had a better race during the week end
2. What is your favorite part and worst part of Circuit Gilles Villeneuve?
The fast parts
3. If you would have the power to add a feature on iRacing, what would it be and why?
A learning tool that would help newcomers
L

1. How was your first race last week at Spa?
Much more competitive than I thought it would be! That's a good thing though.... even though it does appear I'm probably in the bottom 20%... lots of room to improve and learn from other drivers! I tend to be a bit of a quiet guy any way, but I was having mic issues so I just didn't talk this first race. Btw, this was my first race ever in a GTE car. Proud I was able to keep it to one major spin... maybe 2... I can't remember. Seems like a very friendly group.

2. What is your favorite part and worst part of Circuit Gilles Villeneuve?
It's a fun track just about everywhere I think, but I seem to be way too slow in the hairpin - hopefully that will improve as I get more control of the car. I'm not a fan of turn 6-7 sequence either.

3. If you would have the power to add a feature on iRacing, what would it be and why?
I really really wish they would make things less confusing for new members. I remember having to read the sporting code and lots of forum posts to figure out things that seem obvious to me now. I'm not a game designer but maybe take some of the complexity out of the rookie system, better tutorials, or ??. Also, I would love to be able to test drive cars and tracks offline (at any time, not just when patching or whatever) before I buy - or maybe a trial.

1. How was your first race last week at Spa?
Very good! Better than expected for me. My goal to finish between P8 and P10. So to see myself in P4 is a perfect season start for me!

2. What is your favorite part and worst part of Circuit Gilles Villeneuve?
I really love the last chicane because we always are at the limit to hit the wall of champions! The worst part are corners 8-9 because I don't like the kerb there and if you are not taking the corner perfectly, you're screwed! I really wish iRacing rescan this track because that part of the circuit has changed a lot. I've been there this year as a flag marshall for the F1 GP and the kerbs are different than the one on iRacing, and all the off track is now in asphalt.

3. If you would have the power to add a feature on iRacing, what would it be and why?
Like other said here in-game Telemetry would be really awesome! Also I like what Lyndal said about been able to test the car and track before buying it. Another feature that would be nice is to be able to leave a session and change the car!

1. How was your first race last week at Spa?
Not bad, appart the Guillaime spun twice in front of me....Had a good start, was able to fight most of the race.

2. What is your favorite part and worst part of Circuit Gilles Villeneuve?
- I like the back stretch and the last chicane, worst part is turns 8-9

SharkV said:
3. If you would have the power to add a feature on iRacing, what would it be and why?
- Slowinf Dennis....;-)
Click to expand...

Good luck all! Sorry I can't be there.

Hi,
Here is a 10 minutes highlights of our race

SharkV said:
Hi,
Here is a 10 minutes highlights of our race

Will watch it probably next week but I hope to see some crazy battle between me and Eric! Epic race!