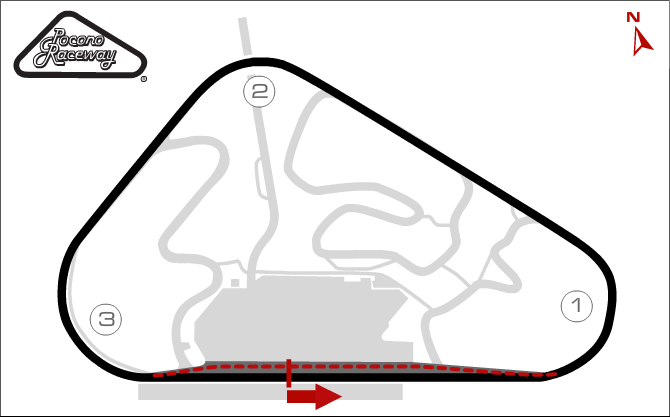 1. Three different turns means individual styles will show. Which turn do you feel is your strongest at Pocono?

2. Three races left this season. What's a goal to accomplish before the end of the season for yourself?

1. Three different turns means individual styles will show. Which turn do you feel is your strongest at Pocono?
Definitely Turn 1 is my strongest. The last time the League was here, I was one of the few people who could pass on the low side of Turn 1 with ease. It's an easy corner to overdrive, I use that to my advantage to get by people when they pushed up.

2. Three races left this season. What's a goal to accomplish before the end of the season for yourself?
Straight up I have to win 2, if not all 3 races. Darlington absolutely murdered me from a championship aspect. Not only giving War the lead, but bringing KDawg and Zeke back into it. All three guys are tough as hell, so I have no choice but to drive like a bat out of hell now after what happened to me at Darlington. I was really strong at Pocono last time we were here before I disconnected, and I've won at Kentucky and Homestead before.

1. Turns 2 and 3 are my better areas with 2 probably being my best. Turn 1 has been killing me most both time and speed wise.

2. My goal for the season is to contimue my top 10 streak and get a couple of top 5s and maybe a win, which I feel is doable as I tend to be pretty strong at Homestead.

1. Three different turns means individual styles will show. Which turn do you feel is your strongest at Pocono?
Not really sure what my best corner is just yet. Have never been here before so I'm still figuring it out. Looking forward to the race.

2. Three races left this season. What's a goal to accomplish before the end of the season for yourself?
A top 5 would be a lofty goal of mine before seasons end. After three 7th place finishes in a row my expectations of myself are climbing. I'm going to keep going for tops 10's and see what happens.
V

Felt solid going in to tonight, I put a lot of laps down for Pocono.

Knowing I gained on my points lead, I still can’t say I’m walking away from Pocono happy. I had led this race most of the night, only really giving it up to pit early on before racing back to the front. Fuel got me again tonight unfortunately, I still have to look back and see if I could have went the extra lap before pitting. On to Kentucky where we need a good run to be comfortable heading into Homestead

Q: 4th
I was honestly surprised with this result. I was barely running top 10 laps much less a top 5 qualifying efforts.

R: 6th
I have now finished 6th in 5 races this season. Tonight it was due to some luck of War running out and running by a few guys saving fuel. I managed to save some fuel but not enough to make it around for the last lap but I did manage to cost around turns 2 and 3 and make it back to the finish without being passed. Unfortunately, I did make two mistakes tonight that cost my teammate dearly. I ran over Hootius when we all feel in line going into 2, being a little aggressive I didn't let off in time and sparked a caution. We both rebounded however, as we were running up in the top 5 I caught the apron of turn 2 washed up the track, but I managed to save it which was followed by a hospital wiggle. Hootie had a run and swerved to miss and ended up in the grass, no caution and the race would stay green the rest of the way. If this had happened anywhere else on the track it wouldn't had a big deal it just happened to be at the one straight away with a grass patch. After these two instances I may go back to the wheel as I do have more control with it, but I prefer the controller over the wheel in this game. I had a decent finish but I am still kinda mad at myself for making these mistakes. Anyways on to my current hone track of Kentucky. Hopefully I can use home field advantage and steal a win

My point on this game. Love oval, but my love is fading on this game. I'm getting some enjoyment from doing all my setup test in race. But I have a nack for getting cought in the wreck with no yellow.
J

Q. 3rd qualify was horrible for me considering i ran .300 faster
R. 1st -- I would say that this would be one of my worst tracks to race on
Altho the race whent pretty smooth it wasnt easy battling #3 - #88 - #41 - Or #24
I still felt like i was easy to make mistakes so in the end that would have been the key.
near the last pitstop i was hopeing for a great a stop, one that would put me ahead orr just behind vWardude #88.
My last stop was a 14.5 and came out nead dead even with #88, with having 1 lap to the good i figured the #88 would run out
So that being said there was no need to pass him. Once vWardude made a mistake i took advantage of it and started going hard.

Either way was a great race and to those who had bad races the last couple race i hope it gets better for you guys.