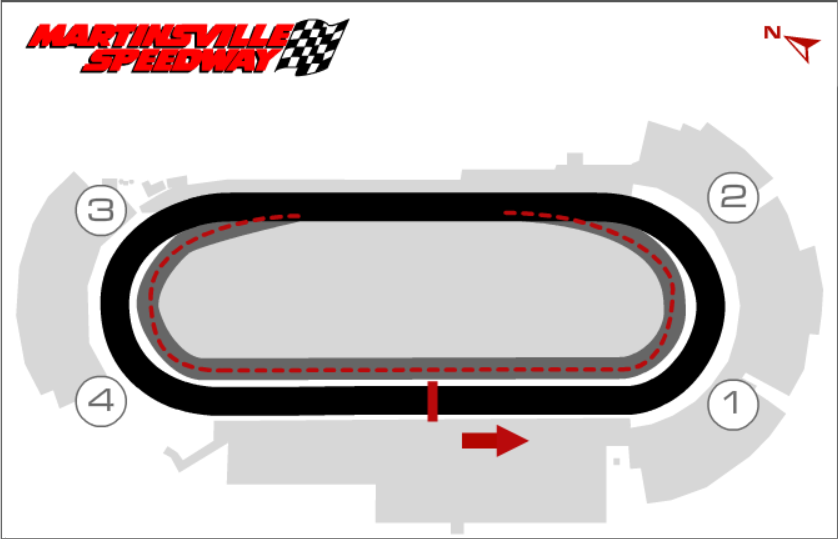 Q: 8th Didnt find any rhythm and messed up the setup.

R: 5th. Race was pretty awsome even with guys running different paces there was good honest racing never had an issue with lapped cars and the leader was patient not forcing the issue while myself and War fought for position. Great Race.

Q: 3rd
Solid lap. Wasn't expecting much more than that to be honest.

R: 3rd
Did my best to screw myself by getting a speed penalty on the initial pit stop for race adjustments (giving out race instructions while trying to hit the pit lane speed is harder than it seems lol). So I ended up starting 13th. Had a very fun time driving up through the field. For this being my worst track, I was really happy with my performance. Had a fun battle with War after the first pit cycle. Very happy I came back the way I did. I felt like 3rd or 4th was what I deservd tonight, so I'll take the points and look farward to redemption at Watkins Glen in 2 weeks.

Q:13th
Struggled with consistency in my laps and was never on pace

Q: 11th
R: 12th
Well I got my first taste of league racing and let's just say I have a lot to learn. Martinsville and I didn't get along and I struggled finding a good setup that I could work with. I pretty much spent the race staying out of the leaders way and do my best to get on a consistenty good line. I had a blast though and I'm excited to move on to the next race and make progress towards being competitive.

Q: 9th
Gave it all I had. Had found a better line about an hour before the race that helped me cut almost .15 off of my lap times, however I struggled to nail a perfect lap so I felt I left some on the table.

R: 8th
The streak dies at 3 consecutive 6th place finishes. However, I do believe I posted my best start to the season with my 4th consecutive top 10 finish. As good as everyone was tonight and how great everyone raced, I am ok with my finish. I feel it could've been better but struggled to stay in rhythm at least with running 19.1 times. I am still hoping to get my first top 5 of the season and my first PRL win. I feel both are coming and am excited to see Auto Club coming up in three weeks as I had a really great car there in season 2 and would've won the stage if it wasn't for a slide and very well could've won the race if it wasn't for a DC.
J

Q. 1st
For qualifying i thought i was gonna start top 5 top 3 but my lap time held up and that helped alot for the start of the race

R. 1st
First off gotta thank nickcm12 - Hooti for letting me race the PRL Series. I cant think of a better place to debut my first then Martinsville, it has always been my number 1 track next to Richmond. All and all The car handled flawlessly throughout the event, the pit stops were fast everyone was clean out there, the guys back at the shop built a great car for the race. Had a great rythem was running consistent lap times, (19,100 - 19,000 ) I knew at the start that if i stayed smooth i Could bring home the win, not forcing issues is what kept my car in one piece. Was a great race, and looking forward for round 2......... #78 JakeGirouX24

The 4th race of Season 4 of our Nascar Heat League Saw Round #2 in the Playoffs kick off at a track made for action, the .5 mile paperclip of Martinsville Speedway. Last time the crew hit Martinsville was back in Season 2, which saw Micheal Caterino (vWardude) make a late race pass to take home the Grandfather Clock.

Qualifying was as tight as you would expect from Martinsville. New comer Jake Giroux (JakeGirouX24) snagged the Pole in his debut race, but it wasn't easy. Jake clipped Kyle Spencer (KDawgHonda777) by .014 secs, and Charles Sumner (Hootius) by .041 secs. Teammates Micheal Caterino (vWardude) and Nick Michaud (NickCM12) rounded out the Top 5.

The race started out with an embarassing moment for Charles. While calling out race instructions during the pacing laps so everyone could pit for car adjustments, Charles got caught speeding entering pit road by 2 MPH and was sent to the back of the pack on the start. This worked out great for Jake and Kyle up front as they got the spacing early, and completely checked out from the rest of the pack. Both driver's race pace were as strong as their qualifying pace, as they would lap the field on the way to finishing as they started. For Jake, he pulled off the ultra impressive Hat Trick in his debut race as he took the Fastest Lap of the Race on his way to victory. Kyle's runner up finish was a stellar run as well with no mistakes, a great follow up to his 3rd place finish from last week. Now while Charles would not be a contender for the Hard Charger Award as he technically qualified 3rd, he definietly passed the most cars during the race as he charged all the way back up to 3rd to finish the race. Michael continued the trend of finishing where he qualified as he came home in 4th place, falling a few positions short of defending his previous Martinsville win. The streak ended there however, as Rob Besaw (Xsyse) earned the Hard Charger Award for the race, going +3 on his way to rounding out the Top 5. If you didn't noticed, there was no talk about shuffling orders or different pit strategies in this recap. Why you ask? Because the entire field tonight deserves a round of applouse, as the crew did what was thought to be impossible, and had a Caution-Free race at the track that is historic for yellows. This was only the 2nd time in the 47 race history of the League that we did not see the yellow flag fly.

The Driver's Championship saw the lead widen by just a little bit, as Charles Sumner (Hootius) raised his 1 point lead, up to 7 over Adam Zemke (Zeke_H30). Micheal Caterino (vWardude) is just a point back in 3rd, as Kyle Spencer (KDawgHonda777) moved past Nick Michaud (NickCM12) to take over 4th in the Standings.

The Playoff Championship is still very tight as race winner Jake Giroux (JakeGirouX24) is not in contention in the 2nd round. This means the 12 drivers still in the hunt, are within +/- 12 points from the 8 car cutoff that will happen in 2 races. Runner-up Kyle Spencer (KDawgHonda777) is the only driver that is double-digits points up on the cutoff after Martinsville.

The Team Championship still has not seen a team breakaway yet after 4 races. Car Ramrod (Charles and Christopher) gained 1 point over defending Champs One-Two Racing (Michael and Nick), bringing the lead up to 5 points. Wall Riders Inc. (Adam and Brian) are sitting in 3rd, but only 10 points away from the lead.