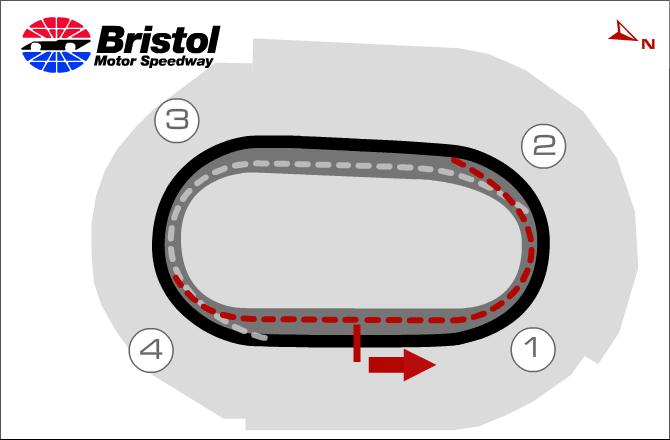 This will be my first time at Bristol looking forward to the challenge. Time for the last lap bump and run don't leave the bottom open on the last lap lol.

Q: 4th
I had a fast truck, although I didn't hit the fastest lap that I knew I could've got.

R:11th (DNF-DC)
I was off to a good start, but caught apron. Hanged on the apron till I was able to get back up without issue and fall to the back. I would stay back there as I was unable to avoid other people's messes. I was frustrated after run ins with a couple of drivers who I felt raced a little dirty at times. I was in the back when I DCed so I guess I can't say I felt good about anything race wise other than I knew I had a car that could run up front just didn't get the chance too. All I'm going to say is I am really looking forward to Kansas and if I can find the setup I ran for the mini-season I have a really good shot at winning it.

Qualifying for the first short-track race in Truck history did not lack any excitement as the Top 3 qualifiers were all within .1 seconds of one another. Jake Giroux (JakeGirouX24) claimed his first Truck Series Pole, edging out Kyle Spencer (KDawgHonda777) and Michael Caterino (vWardude) by very slim margins. Christopher Johnson (MeattyLoaf) and Brandon Wedding (BWedding92) rounded out the Top 5.

Jake would hold the top spot until Lap 21, when Kyle used a strong inside line to complete the pass. From that point, Kyle would not look back. While also claiming the bonus point for being the Stage winner, Kyle would use a 2 tire strategy on the final pit stop to cement a +10 second win, claiming his 3rd overall Career Nascar Heat win.The battle for 2nd however, was far from as comfy of a ride as Kyle experienced. Michael would outlast last week’s winner, Sean Ryan (Sean420Cali), and Jake, as all 3 drivers finished within .4 secs of each other in a hard fought battle. Nick Michaud (NickCM12) rounded out the Top 5, as the last driver on the lead lap. Michael would claim the “Fast Lap of the Race Award”, as Sean claimed the “Hard Charger Award”, gaining 6 positions throughout the race.