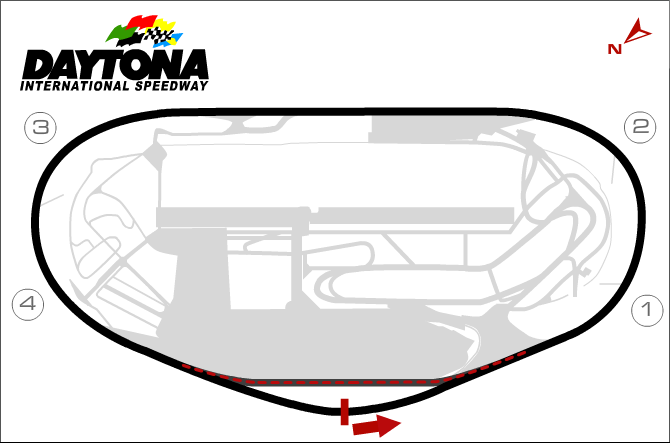 1. For the third time in Five Seasons, we're kicking the season off racing at Daytona. Do you like getting this restrictor-plate race out of the way early or would you prefer a different style of circuit to start the season off?

2. What is your personal expectations for the season?
V

1. I’ve always been a restrictor plate guy, not so much this game though. Having to wait for someone to make a mistake as opposed to using skill to set up a pass is a no no for me. I’d personally rather see a different track thrown into the mix, restrictors on heat have always been that race that can throw off your season purely based off luck.

2. Nothing less than a championship. I know I have 2 but I’m greedy damnit!

1. I like restrictor plates, although I do wish it was later in the season. I just wish my bad luck run at them would stop. My results with them have been thus far Season 1 Netcode with Brian at 'Dega taking me out in the Heat and LCQ. Season 2 Netcode with Aaron in the LCQ after struggles in the Heats, Daytona and a jumpy Kyle at Talladega. Season 3 I believe I was taken out by a spinning car. Season 4 Pit Road glitch. All 5 restrictor plate races I was a contender and was taken out by bad luck. Hopefully going to start this season off right.

2. I want a win damn it. I've been close a few times and have yet to breakthrough. We hit up some of my best tracks this season and I feel this is the season to finally get it.

1. I personally hate restrictor plate racing in this game and would be fine not having a race at all, but I know it's popular for most of the league so that's why we keep one in the rotation. It's just the lack of a second line and the terrible netcode in this game make it not enjoyable. This week I did an iRacing race at Talladega for the PRL truck league, and it was a lot of fun. Granite it was nerve-wracking, but fun. Heat just doesn't give that kind of experience... and that's coming from a guy who's won two of the five restrictor-plate races in the league.

2. As always, anything less than the championship I won't be happy with. I put myself in good situations every season, and then something happens and I I see it slip away. I've got to make small changes in my driving style to ensure that I take away those situations and see if I can finally seal the deal.

1. Not a fan of restrictor plate in Heat. Rather have it off schedule, but if it's gotta be there let's get it over with!

2. First goal is a team championship for Car Ramrod. Beyond that a top 5 points finish and contend for my first PRL NASCAR win.
E

1. Not the biggest fan even though they tend to be my best chance at competing. One little mistake by you or anyone else can lead to a long race running alone.
2. I look forward to just continuing to close the gap, been getting closer and closer each race.

Q:17th
Got caught up in a mess and never ran a fast lap

R:5th
Had some good luck and bad luck. I got caught in a mess after the start of the last stage. Shuffled me back. Due to guys being laps down it didn't hurt too too much. Took fuel only on the last stop helped me gain a position. However, due to some guys bad luck I was able to get a top 5 finish to start off the season.

Was looking good for a good finish until this incident happened making our last green flag stop.
https://www.youtube.com/watch?v=w9tnf-3RBJs

Here is my full race, I take the positive of running up front most of the race. Look forward to racing a real track next week!
https://www.youtube.com/watch?v=Jg66aPSk5WM

Q: 4th
Surprised to be that high up the charts. Never did get a big mulitcar draft lap in and got caught up in that mess with 2 to go that killed the final 2 laps.

R: 1st!!!
Kind of frustrating to be honest to get lucky 3 times at restrictor plate races (since I dislike this style of racing), and get wrecked out of good finished on tracks that I had a chance to win at. Lost out of Stage points both times by 1 position. It all came down to the last pit stop. Sucks that I got into Aaron like that, he didn't know I was pitting with him and he slowed really early. I was trying to get both of us in the pit at the same time to take 2 cans and 2 tires, which would have saved us 3/4 secs over everyone else. Instead it was KDawg and I that did that strat and got the big lead. I was able to keep KDawg behind me and not let him fall back far enough to get a big run on the final lap and make a move. I am just happy we are done with this style of racing until the next game.... only if they improve it.
V

CJ and I had a really nice run catching the draft from Hoot and Aaron coming to turn 3, exiting turn 4 if I had gave CJ a bit earlier warning, I think I would have had pole as I went high with a really nice run but he had stayed low.

See answer to pre race interview question 1. Lol. I probably cost myself a top 5 finish when I stayed out at the end of stage 2 trying to get get clean air after frustration with getting caught in wrecks. I figured a caution would soon follow and would put me back on track with the same pit cycle as everyone but I got the crap end of Daytona luck and it never flew again leaving me driving by myself for the remaining half of the race
B

R:7th
Similar to meattyloaf - good luck and bad luck. I had to pit at the end of the second stage and it didn't go well (I need to work on pit stops) and I got caught the first car a lap down but got the lucky dog. I also got caught in a mess after the start of the last stage which shuffled me back but I at least had a drafting partner with Meatty. Due to guys being laps down it didn't hurt too too much. My last pit stop was better, but unlike Meatty I took two tires and fuel and lost his draft so I ran the last handful of laps all alone. I was in 8th place going into the final lap and came across the line in 7th so not sure if someone ran out of gas there. I guess overall I was fairly happy with the lead lap result - this is one of my best tracks so I was hoping to contend for the win. Still not sure how a caution wasn't called at the beginning of that third stage. Once that didn't happen any chance of running with the lead pack was gone. I know I won't get to race every week being the first alternate, but I had a great time and look forward to future races.
You must log in or register to reply here.
Share:
Facebook Twitter Reddit Pinterest Tumblr WhatsApp Email Share Link
Menu
Log in
Register
Install the app
Top